Once you understand the meanings of esoteric symbolism, churches, cathedrals and temples make much more sense. It also makes tourist attractions more fun to visit because let’s face it, the audio commentary is boring!

Valencia Cathedral in the Placa de l’Almoina is a prime example. Most people come here to see a shiny chalice behind a Perspex case. The chalice is alleged to be the mysterious Holy Grail. You can barely see it for the light bouncing off the Perspex.

The alternative highlight is St. Vincent’s severed arm if you like a bit of gore. The audio doesn’t tell a very interesting story though. Nor am I convinced the arm is a real-life artefact either, but you can believe whatever you like.

What I do know is real are the secret messages left in stone and artwork. The use of esoteric symbolism through sacred geometry, numbers and iconography have been coded and adopted by stonemasons responsible for building sacred temples like Valencia Cathedral.

This article explains what some of the most common esoteric symbols you find in Christain churches mean.

Symbolic Meaning of the Latin Cross

The ground plan of Valencia cathedral is built to resemble the Latin Cross, a deeply symbolic Christian symbol that was adopted by the Catholic Church as their principle symbol sometime around the 4th Century. 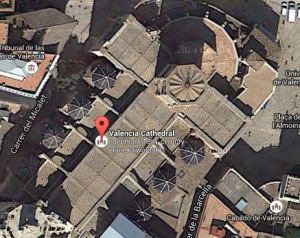 But the cross has its origins in remote antiquity. It is known to have been used in Babylonia as the symbol of Tammuz, a forerunner for the symbol of Jesus Christ – despite what some Christians believe.

The cross was a pagan symbol and although it was used by the church in the early days of Christianity, the cross was depicted with a snake wrapped around the centre shaft.

In esoteric symbolism, snakes entwined around a rod or a tree, represents kundalini energy – the vital energy that passes through the central nervous system along the spine.

Even without the snake, the Latin Cross is associated with Kundalini sex magic. The male + sign and the female – symbol represents the coming together of the two sexes. But on an esoteric level, it is the two charges of energy that create reality.

It is likely that the modern-day Christian Cross originated from the ancient Celts of northern Europe. The oldest known Celtic Cross was found in Ireland and dates back some 5000 years. The Celts were sun worshippers and Christianity adopted some of their symbols to help the transition from worshipping the sun to worshipping the son.

The Cross also represents the four elements. The circle on the Celtic Cross and the Egyptian Ankh is the sun or the spirit. So the church removed kundalini sex magic and spirit from their principle symbol, but the meanings have not been lost, just places elsewhere. For example, the fifth element of Spirit reappears with Christ on the cross.

The symbol of the Latin Cross atop Valencia Church, therefore, represents the earthly four elements, and the mysterious element of the Holy Spirit we also find in the Trinity. You can learn more about what the four elements mean in this article.

The esoteric symbolism behind the origins of the Star of David is as curious as to its throughout history. 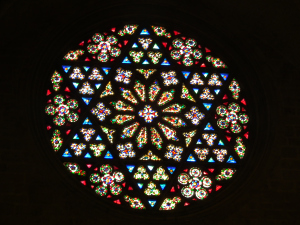 The symbol is synonymous with Jewish tradition. Israel adopted the star as their symbol in 1345, much to the chagrin of Muslims. Needless to say, they are still arguing who has rights to its origins. Both agree, however, that the symbol has its roots in the House of David in the ninth century BCE.

Since the 17th Century, the star has been used to identify Jews by the authorities. First, it was their houses, then Jews themselves. This race of peoples has suffered many persecutions throughout their history, culminating in the horrific holocaust in the 20th Century.

The geometric name for the Star of David is, of course, the hexagram which has a deeper spiritual meaning. Kabbalists say it symbolises God’s complete rule over the universe.

The Star of David is, therefore, a reminder to be master of your mind so that it is in perfect balance between the left and right which leads to a better understanding of things you need to know to bring success into your life.

Mary Madonna and the Oval

One of the most striking images in Valencia Cathedral is the Mary Madonna stain glass window encased in an oval, the shape of an egg symbolising the birth of creation.

Mary is the divine feminine of the Holy Bible who symbolises several things including the heart. Her stance and other symbolism reflect she represents love in this instance. She is often depicted with roses, representing love (pink), white (purity) and red (desire). 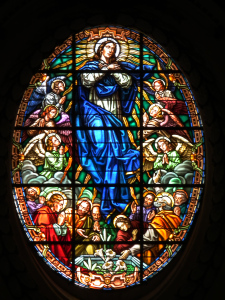 You will notice in this image however, the men are reaching out toward white lilies, indicating the purity of heart. In Greek mythology, the milk that spilt from the mouth of Hercules and fell to earth turned to lilies.

The Lily then tells us that to develop the strength we need to overcome obstacles and create what we desire in life must be conjured through the purity of heart – which is unconditional love of everything and anything.

The beaming sun behind her head represents she is illuminated, meaning when you reach the same level of consciousness as the divine feminine you know the answer to all life’s dilemmas. You will also notice the rays over the heads of the six angelic women and eight saintly men also symbolises enlightenment.

The angels and saints represent the other aspects, or characters of our personality, which in this form depicts mastery over the dark passenger. Including Mary, there are seven females (the seven representing the divine feminine) and eight men (eight being the number of higher consciousness or God who is seen in Christianity as the male principle).

Let’s not forget that all these characters are encased in the oval egg of creation. The Sanskrit word Tattva meaning principle, reality and truth involves a combination of five shapes which correspond to the five elements of earth, air, water, fire and spirit. The fifth element, spirit, is symbolised by an oval egg.

The All-Seeing Eye in Esoteric Symbolism

The all-seeing eye is one of the most commonly talked about deceptions of esoteric symbolism thanks to its appearance on the back of the US $1 bill. Among conspiracy theorists is associated with the evils of the Freemasonic Illuminati. You can read more about the symbolism on the one-dollar bill in this article. 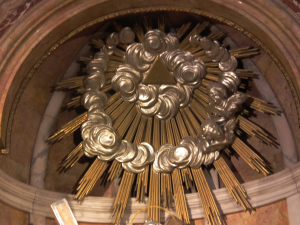 What the eye actually represents is inner-understanding and higher knowledge. It relates the same meaning as third eye symbolism in the ancient Vedic texts. Balancing the ‘Middle Pillar’ energy centres and opening the third eye chakra went on to inspire later eastern philosophies that are taking hold with spiritual seekers from the west looking for something other than Christianity – even though both religions carry the same core message. Find your core.

The all-seeing eye symbolism can be traced back to Egypt as the ‘eye of Horus’. The iconography was later adopted by the Christian Church to help pagans embrace the transition into Christianity. So it goes.

But the original meaning of the all-knowing eye has not been lost throughout the cultures. All over the world third eye symbolism relates to the opening of the third eye chakra, believed to be the pineal gland, sometimes referred to as the third eye or inner eye.

The Triangle in Third-Eye Symbolism

The all-seeing eye is always accompanied by a triangle in some form or another. On the Great Seal of the US, the eye is drawn in the three-sided capstone of a pyramid, and in Christianity, it is often found in an equilateral triangle.

In Valencia Cathedral the triangle appears as the all-seeing, but the esoteric symbolism represents the same thing; when you see the bigger picture you can bring anything you desire into manifestation.

The triangle essentially represents manifestation which is achieved through thoughts, actions and emotions. Horus, the Egyptian creator God also represents the manifestation of when human beings become connected to “God” (fully enlightened). Throughout Egyptian history, the sun-God is associated with the power of knowledge, awareness and transformation.

The Eye of Horus is made of six individual symbols each of which recognises one of the six senses, taste, touch, hearing, smell, sight. The sixth sense earned when you open the all-seeing eye, the pineal gland which is your mind’s eye and enables you to visualise. The more vividly you can visualise, the greater ability you have of imagining yourself in situations that are favourable to you.