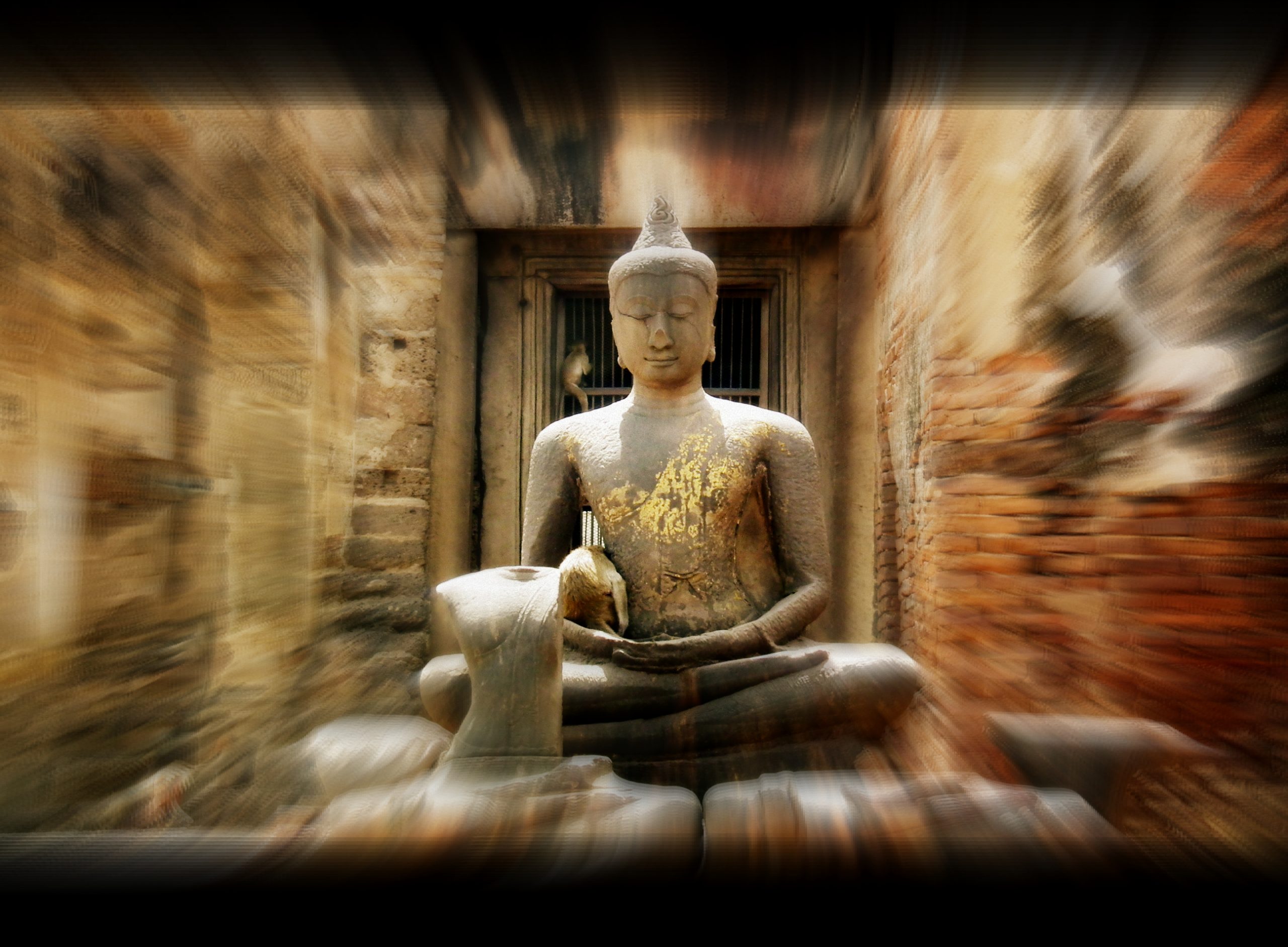 Travellers meandering through Thailand might want to check out Lopburi. Or maybe not. There’s not much there other than ancient Khmer ruins riddled with monkeys.

Located around 150 kilometres north-east of Bangkok, Lopburi is only a couple of hours along the track and a pleasant train journey through the Thai countryside.

Most visitors (probably) come here to see the Monkeys. And why not. The furry little darlings jump on cars, steal sunhats, shades and bags, and generally harass people.

A sign reads: Don’t open the window. Beware the Monkey come in.

Well, you’ve been warned. Take bananas at your own peril. There are far too many monkeys’ to feed them all and the offer of food only serves to cause an outbreak of chaos. The monkeys’ fight. They might even fight you.

But they are entertaining.

Lopburi is one of the oldest capitals of the Khmer Empire. What is left of the ancient Hindu shrines first appeared in the early part of the 10th Century, and were later expanded between the 12th and 14th Century.

The ruins are made of laterite and distinguished by the towering prangs with their distinctive jagged edges. This is a typical example of Khmer architecture. But it is the symbolic meaning fashioned into the stone that is most significant and interesting.

Although often ignored by modern scholars – at least this is how it appears to me – the ancients had a profound understanding of how the human psycho-biological system works.

Furthermore, they had an in-depth knowledge of energy and the laws of the universe. Many ancient mystical texts talk about the interconnectedness and oneness of mankind with the Universe, the totality of nature and all sentient beings.

This notion is still accepted by today’s religions and free-thinkers, particularly Hindus and Buddhists.

…even though Hinduism and Buddhism are practically one and the same philosophy turned into a religion.

Phra Prang Sam Yod in Lopburi was originally a Hindu Temple, and the three prongs are said to represent the Holy Trinity of Hindus; Brahma, Vishnu and Shiva.

Some scholars associate the colonettes with Buddha and the two bodhisattvas, Avalokitesvara and Prajnaparamita on account that King Jayavarman VII that ordered their construction was a Mahayana Buddhist.

But the three prangs have a much deeper meaning. Whilst they do symbolise mythological Gods, they also represent aspects of our nature and personality.

The real clue is in the number of prangs. Three is the number of manifestation, which is determined through thought, emotion and action. Your thoughts and emotions drive you to action. The cause and effect of your actions result in a manifestation.

In his teachings, Buddha spoke of the “Middle Way”, the need for balance in your life rather than excessive behaviour one way or another. For readers familiar with Christianity, the seven deadly sins are not forbidden acts but should be balanced with the seven heavenly virtues.

In alchemical symbolism, the number three has many meanings, but the most significant is the three aspects of our personality; animal nature, human nature and divine nature.

Our animal nature controls our basic instincts; the need for food, sex and survival. Sometimes we cannot control our urges for these basic needs and we become overweight, lustful or driven to wrongful acts.

Human nature is defined by our “free-will” with which we are able to make life choices. This capacity for decision making can benefit us, or our decisions can be to our detriment.

In a sense of spiritual growth, our life choices can often be destructive. And because we are creatures of habit, repeatedly make the same mistakes – without us even realising it. This is because of the values we develop through our experiences in life.

Divine consciousness is our higher-consciousness, our innate ability to tap into a divine source that guides us. It is in this state of understanding that we can free ourselves from the bondage of ignorance.

The problem for most of us is that we do not realise we have a divine nature.

But the ancients did. And they detailed all this information in myth by personifying Gods, demi-gods and other characters. They even carved the symbolism into their buildings and monuments.

Orthodox teaching in Hinduism expresses the Trimurti represents the aspects of the Supreme Being. Brahma is the creator, Shiva the destroyer and Vishnu the preserver.

The depth of meaning is much more complex than this – but let’s stick to basics. Brahma represents thoughts. Thoughts are creation. Sometimes our thoughts land us in trouble which is why the two other principle Gods of the Trimurti sometimes fell out with Brahma.

Especially Shiva, as he usually had to tidy up the mess caused by Brahmas frivolous acts. This is why Shiva is known as the destroyer, he destroys values and traits that no longer serve us so we can lead better lives.

Shiva is essentially the aspect of our human nature which straddles divine nature. When we realise our ignorance we strive to change ourselves and be better people. Sometimes we need to make sacrifices.

As preserver, Vishnu is saddled with the task of making sure we do not fall off the proverbial bandwagon. This is why he is looked upon as the Supreme deity, although Indian myth alludes to Shiva being the most powerful of the Trimurti.

Below the central tower at Phra Prang Sam Yod in Lopburi is a shrine dedicated to Buddha. The word Buddha is ancient Sanskrit meaning “the enlightened one”.

When we adopt the traits of the Trimurti we become illuminated and have more control over our thoughts, emotions and actions. Thus the results that stem from the triangle of manifestation are whatever you create.

Master Mind Content is a leading authority in decoding ancient symbolism . Our research unveils the secrets to understanding and taking control of the the subconscious mind, channeling energy to self-heal and effectively using universal laws to fulfil your potential.
« The Meanings of Esoteric Symbolism in Valencia Cathedral
The Symbolic Meaning of Stupas »

The Symbolic Meaning of Cows in Ancient Mythology  Read More
What is God? A Definition of “The Creator” In Man Read More
Who Are The 12 Adityas in Hindu Mythology? Read More
1 2 3 … 14 Next »
Copyright © 2022 Master Mind Content. All Rights Reserved.
Search Our Site
We use cookies on our website to give you the most relevant experience by remembering your preferences and repeat visits. By clicking “Accept”, you consent to the use of ALL the cookies.
.
COOKIE SETTINGSACCEPT
Manage consent