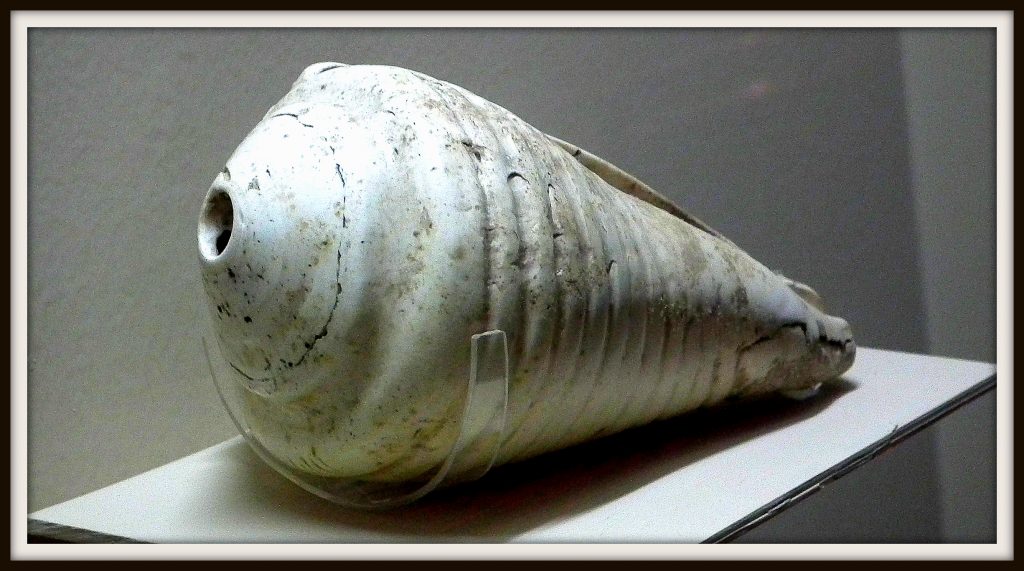 The Symbolic Meaning of the Conch Shell in Buddhism

Symbols used in Buddhism and other religions have hidden meanings. Organised groups give you one version which is a small piece of the jigsaw. The exoteric meaning you find on Master Mind Content, however, is more revealing. On this page, we discuss the symbolic meaning of the conch shell.

The conch shell is a spiritual symbol that has been used in many cultures throughout history. Together with the circle and the spiral, it is perhaps one of the oldest symbols used for esoteric wisdom.

Used for practical purposes as a horn in ancient times, it is typically associated with the sound of horns that were used to wake people up or signal a warning. And this is the official meaning used today, but it’s only a half-truth which is ultimately misleading.

When studying Buddhism, it is important to understand the deeper symbolic meaning of the conch shell.

Ancient sages adopted the practical use and associated the conch shell with spiritual awakening in symbolism. In Hindu myth, the conch makes the Aum (Om) sound that is said to awaken the ignorant from their slumber.

In ancient Sanskrit, the conch is known as Shankha meaning “a shell holding the sacred water.” Vedic myth says the conch appeared from the water after the great churning of the ocean.

Vishnu and Lakshmi both hold a conch, but it is also associated with other characters from Vedic mythology. In the Mahabharata, Arjuna uses a conch shell to call his troops into battle. The shell is therefore associated with courage, power and sovereignty.

According to mainstream Buddhism and Hinduism, the conch shell is also associated with truthful speech and strength. Whilst the above meaning offered by mainstream religion is not wrong, it only reveals part of the truth.

The Esoteric Meaning of the Conch Shell

In Aztec mythology, the Creator God Quetzalcoatl produces life by putting bees into the conch shell to make it sound. This is a reflection of vibration that creates the first wave of life.

When we expand our level of consciousness, the so-called spiritual awakening, we vibrate on a higher frequency and connect to higher states of consciousness within ourselves – from where we find the Truth.

In my opinion, the conch shell is a reflection of the tanden, otherwise known as the hara. This part of the breathing apparatus is located in the lower part of the abdomen from where the ancients say is the seat of creation. Hence why they relate the conch shell with the birth of life – the Aum sound.

Creation in the Chakra System

The tanden is the part of the body where we find the sacral chakra and solar plexus chakra.

Meditators that practice chakra meditation, know that with the right concentration and focus you can help heal emotional and physical wounds.

And by concentrating on the tanden and the chakras there you can also bring to death old values that no longer serve you and bring in new philosophies. In Christianity, the shell is also associated with death and rebirth.

The sacral chakra is associated with water and found in the lower part of the abdomen just below the belly-button. It is from here that we summon strength and courage.

How many times has somebody asked you, “What’s your gut feeling?” The sacral chakra is almost like a second brain but is the innate sense of how we actually feel.

The solar plexus chakra acts as a burning flame, and by focusing on the spot just above your belly-button imagine a bright yellow flame burning away fears and other values that no longer serve you.

This is why the ancients call the tanden the seat of creation, and the symbolism of the conch shell shares the same attributes.

The conch shell also features the Fibonacci sequence, the so-called golden ration that is found in many forms of nature. Some would even say the spiral pattern is the shape of creation.

Ancient sages certainly did; they used the spiral pattern and the Fibonacci spiral as a symbol of creation. The Buddhists did too. Look at the cone shapes on the head of Buddha statues and what do you find?

Strength gives you the willpower to act on your instincts, courage enables you to speak your mind comfortably with anyone, and the “spiritual awakening” is your innate ability to create – and that comes from within.

Now you know why it is important to understand the deeper symbolic meaning of the conch shell - it's useful knowledge to know!

Master Mind Content offers online self-development courses. We have several in-depth guides that explain how symbolism relates to the body-mind-energy connection. Understanding symbolism can help you make important decisions, improve your quality of life and understand more about yourself and your relationship with the world around you.

The Symbolic Meaning of Cows in Ancient Mythology  Read More
Why Three Is The Magic Number? Read More
The Symbolic Meaning Of Stag and Deer Read More
1 2 3 … 13 Next »
Copyright © 2022 Master Mind Content. All Rights Reserved.
Search Our Site
We use cookies on our website to give you the most relevant experience by remembering your preferences and repeat visits. By clicking “Accept”, you consent to the use of ALL the cookies.
.
COOKIE SETTINGSACCEPT
Manage consent