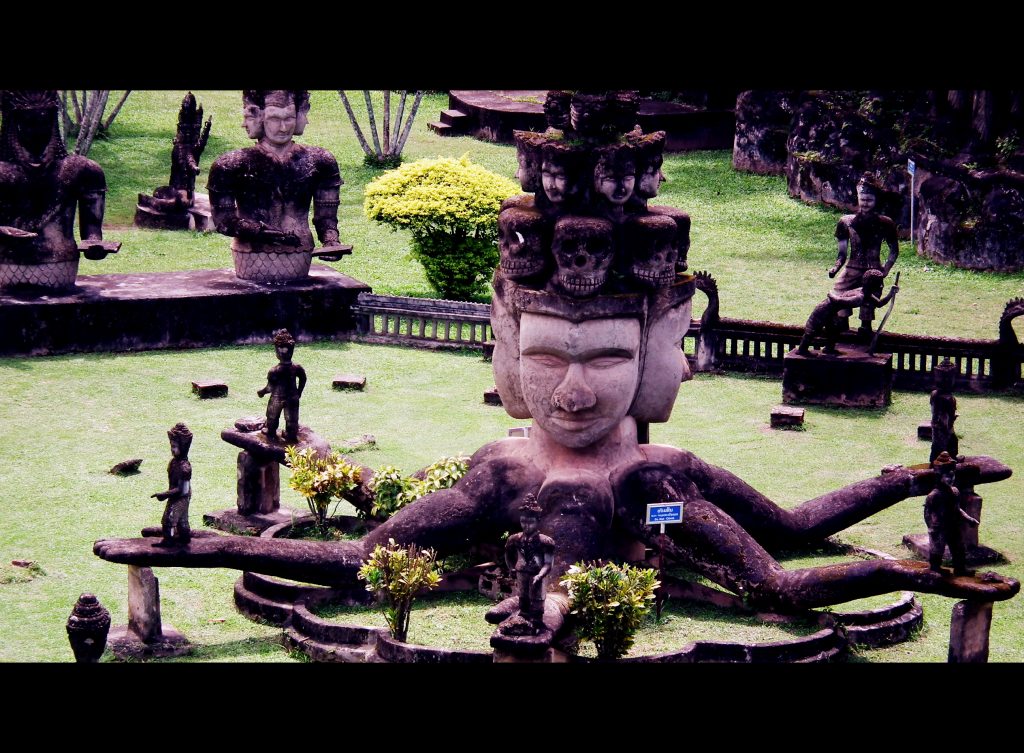 25km south-east of the Laos capital, Vientiane, is Buddha Park, a collection of curious sculptures featuring over 400 stone carvings inspired by Hindu mythology.

Built in 1958, by a Hindu-Buddhist monk, Luang Pu Bunleua Sulitat, Buddha Park is a fascinating insight to esoteric symbolism. Here I will glide over some of the highlights, but you will find more in my book Journey’s To Ancient Worlds: The Search For Truth which will be published later this year.

To get to Buddha Park, take the number 14 bus from opposite the international bus station. Walk along Khu Vieng Road past the food stalls and taxi touts that will tell you there is no bus to Buddha Park and turn right.

The journey takes around 1 hour. Tell the driver where you want to go and he will stop for you. The trip will take a good half-day, and there is a café where you can get food and drink.

Below is an insight into what some of the symbolism means – just to make your day out that little bit more interesting!

To your right, as you walk through the entrance to Buddha Park, you cannot escape noticing a giant stone dome. You can go inside the dome and climb to the open platform on the roof where you will get a great vantage place to take some photographs.

The entrance to the dome is a demon's mouth. This is most likely Raktabija and represents the dark side of our subconscious mind. The demon within us if you like, the voice that makes demands for cravings and desires that we often give into even though we know we shouldn’t.

In Hindu mythology, Raktabija is a powerful demon that features in the Devi Mahatmya. The demon reaps havoc on the Earth and is confronted by the Goddess Ambika and eight Matrikas.

They attack Raktabija, but each time they insert their swords, the drops of blood that fall from the demon’s body spawn more demons.

The Gods send Durga, sometimes known as Kali, to kill Raktabija. She is the female energy of Shiva and has the power to destroy demons – or from a psychological point of view, sinful thoughts and actions.

Outside the dome, just to the left of the entrance, there is a statue of Shiva and Durga marking their inclusion in the story.

Rakhtbeej is an incredibly powerful demon who has the special ability that every drop of his blood which falls on the ground creates a clone of himself which also joins the battle!

The devas manage to wound him multiple times which leads to millions of his clones being created as his blood falls to the ground. The devas are outnumbered by this clone army and run to Shakti for help. Shakti then assumes the form of Kali and goes out to destroy Rakhtbeej.

There is some confusion about the actual meaning of what the three-faced, six-armed Buddha represents as there are two versions. In Buddhist iconography, some deities are depicted with three-faces and six-arms. They are known as the Asura or Ashura.

The Asura are considered divine beings, but because of their tendency to commit evil acts are the lowest forms of deity; basically, the asura represents the demonic aspect of the subconscious mind. Subsequently, Hindu mythology consistently described battles between asuras and devas – higher consciousness.

The other version seems to contradict what the asuras represent, however, and given asuras are sometimes depicted with four arms or numerous arms, it is difficult to say which version is correct – such is the confusion caused by the misinformation of Buddhist and Hindu teachings.

In some eastern mystery schools, it is believed that there are more stages of consciousness to attain, even after one becomes a Buddha. The qualification for becoming a Buddha, or reaching enlightenment is to recognise your mind perceives illusions and that everything is interconnected.

Once disciples come to this self-realisation and free themselves of the mental and physical bondage that swamp us in ignorance, you can set about achieving higher states of conscious awareness.

The three-faced, six-armed Buddha is said to be the fourth level of consciousness where the mind is highly developed and enlightened beings can acquire profound insights from other people without them even speaking a word to one another.

On the most basic level, the deva holding the Dharma wheel represents higher-consciousness, or if you like, God-Consciousness. It is this level of consciousness Buddha’s operates on a day-to-day footing after the discovery of Absolute Oneness of Mind or Samadhi.

Note how the right finger of the deva’s left hand is pointing towards the floor, whilst the eight-pronged dharma wheel is pointed upwards towards the sky. This represents the opposite equals of the macrocosm and the microcosm – as above, so below.

In other words, the inner-self has the same attributes as the Universe. The same compounds found in space are the same compounds in the human body. Scientists acknowledge “we are stardust”. Actually, we’re just made from the same elements as the stars. But more than that, we are a direct reflection of the laws of nature.

The flame-like crown above the deva’s head illustrates that she is illuminated, hence we can distinguish that she is a higher conscious deity and not an asura or nymph.

The same symbol is used for the three jewels of Buddhism of which the dharma is the most important doctrine – living by the eights principles of the Noble Eightfold Path.

One of the most prominent sculptures in Buddha Park is Shiva riding on the back of the three-headed elephant, Airavata.

In Hindu myth, Airavata is actually the mount of Indra, king of the Gods, but here we find Shiva, one of the principle Gods standing on the back of the elephant.

Shiva is known as the destroyer of creation, ignorance and misery. In psychological terms, Shiva is the personification of self-realisation, the moments when you recognise old values no longer serve you.

When old values are destroyed, it makes way for new ideas to emerge; and this is why Shiva is one of the most venerated of Hindu gods.

Airavata, on the other hand, represents creation – or in this case new beginnings. The elephant symbolises strength, wisdom and patience.

In Hindu myth, Airavata is said to have six tusks shaped like Mount Meru where the gods decide – in other words their world, earth where seeds are planted for creation to spring into life.

If you are visiting Vientiane and want to get out of the city for an afternoon, Buddha Park is a decent option. To be honest there is not much else to do in the Laos capital other than visit temples and drink.

Master Mind Content is a leading authority in decoding ancient symbolism . Our research unveils the secrets to understanding and taking control of the the subconscious mind, channeling energy to self-heal and effectively using universal laws to fulfil your potential.
« The Symbolic Meaning of Bells
Power, Patience, Prosperity: The Symbolic Meaning Of Elephants »