The jewel of Yogyakarta is undoubtedly the majestic temple complex of Prambanan Temple. Built in the 10th-Century AD as a dedication to the Hindu Trimurti, the design of the complex resembles the universe in accordance with Hindu cosmology.

I, on the other hand, think everyone has the right to know the secrets to life and am working towards explaining the deeper meaning of esoteric symbolism in relation to the human psyche and the transformation of bioenergy.

This is essentially how you perform self-development and improve your quality of life.

My long-term ambition is to publish a series of books explaining the meaning of esoteric symbolism and intend to deliver various courses explaining how you can effectively use ancient myth for the purpose of self-development.

For now, you’ll have to settle for the content published on this humble blog by way of an introduction. This particular article will look at several key aspects of the Supreme Gods in the Hindu Trimurti and offer a brief insight as to their esoteric meaning.

Who are the Hindu Trimurti?

In a nutshell, the three Supreme Gods of the Hindu Trimurti are Brahma, the creator, Shiva, the transformer, and Vishnu the maintainer. 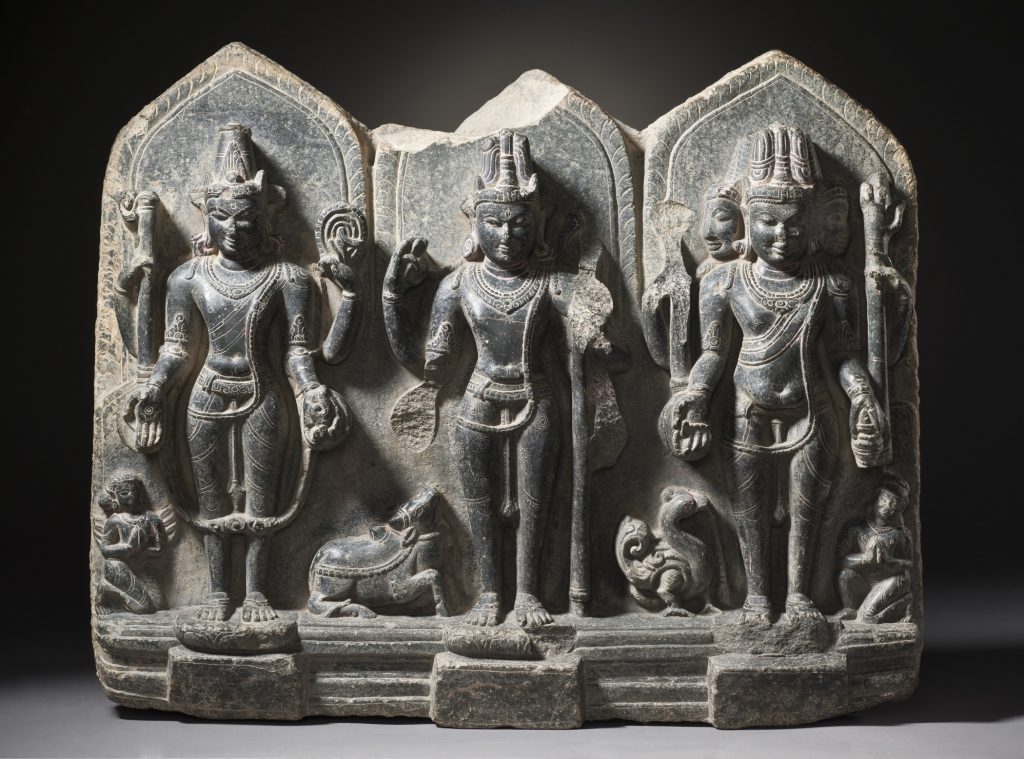 These labels of religious gods are [deliberately] ambiguous, but when you apply the meanings to a specific topic, the hidden meaning is revealed.

I interpret esoteric symbolism in relation to the mind-body-energy connection. In doing so I can vividly describe how you can cultivate mental and physical health, and create the life you want to experience.

First of all, we need to look at how energy transforms. The Laws of Thermodynamics confirm that energy creates matter, energy cannot be extinguished, it merely transforms into something else.

Apply this to the Trimurti and you can see that Brahma is the creative energy, Shiva is the destructive and transformative process and Vishnu is tasked with maintaining that which becomes manifest.

Now allow me to explain how this principle works in the relation of self-development.

During this time you adopt attitudes, beliefs and personality traits. This is the Vishnu, the maintainer. In Hindu myth, Vishnu reincarnates as various stages of “spiritual” maturity.

As you mature, your attitudes, beliefs and personality traits change. In order for this to happen, your old views of the world have to be dissolved in order for new ideas to take hold. This is the role of Shiva. 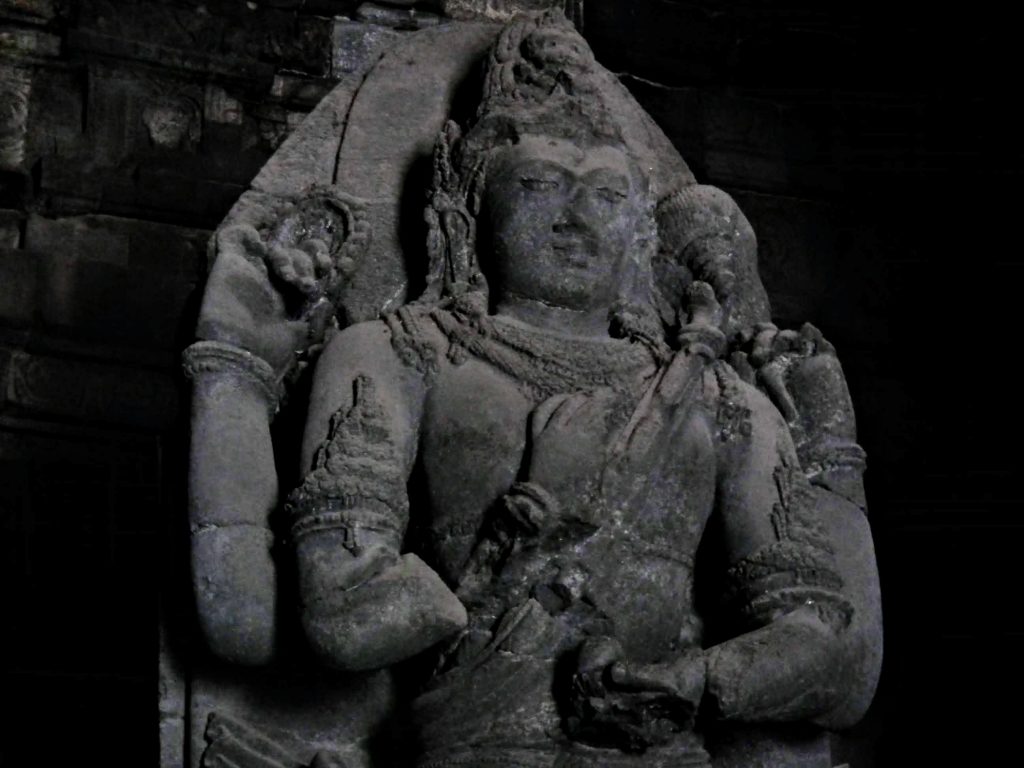 This is essentially what is meant by overcoming ego. However, changing something about yourself doesn’t necessarily mean you are dissolving ego – you could just be replacing one ego-centric behaviour with another one.
The goal of self-development is to identify weaknesses in your personality, attitudes and beliefs that create problems in your life and develop into the best version of yourself – your True Buddha Nature. How you identify your Buddha Nature can be found in ancient myths and many other philosophical writings.

Understanding the nature of your True Self is one thing. Obtaining the courage and the perseverance to acquire the wisdom and achieve it is an entirely different challenge altogether. But an understanding of the Hindu Trimurti and other gods in ancient myth certainly helps.

Prambanan is characterised by the three towering prangs, each of which is dedicated to one of the Hindu Trimurti.

The tallest building is the 47-metre-high temple in the centre dedicated to Shiva, the most powerful of the Supreme Gods in the Hindu pantheon.

In gematria, 47 = 11 a number of mastery. Essentially this number indicates you have the power and ability to overcome habitual thinking. This is why Shiva is known as the destroyer and transformer. 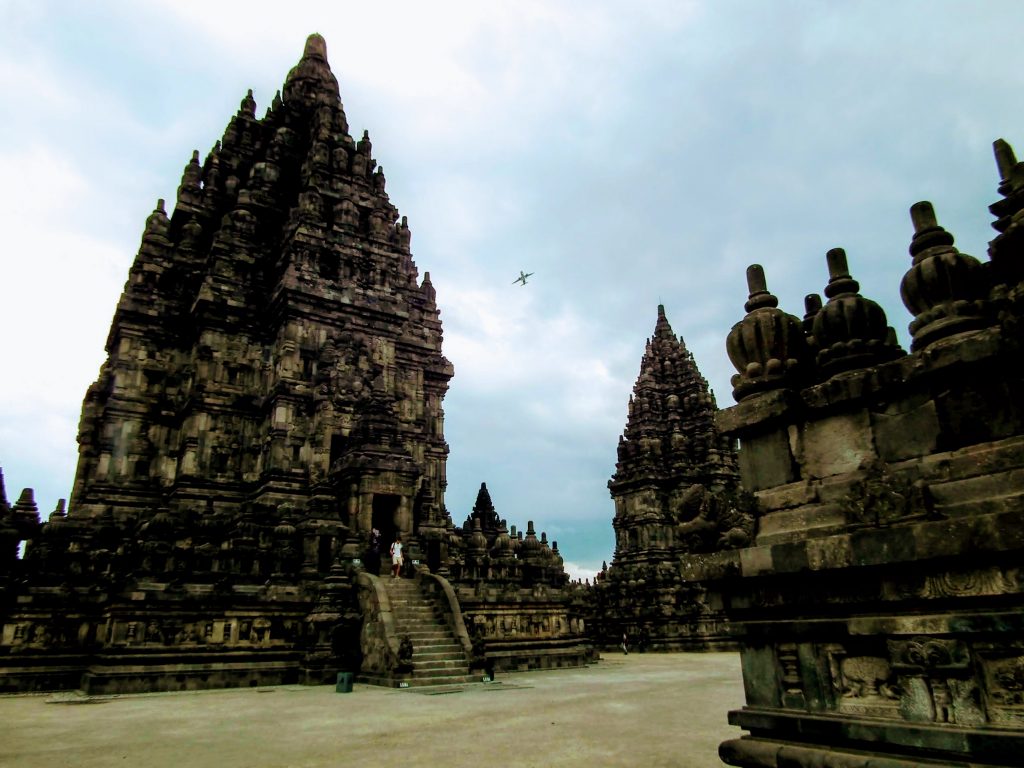 In contrast, the temples of Brahma and Vishnu are 33 meters tall which reflects total mastery over desires. Jesus died at 33 because he had complete control over himself. Forgiving his captures and the men that tortured him is a powerful image of the need for acceptance (of yourself and others). When you reach a status where you have complete control over your thoughts and emotions, you feel peace and harmony and maintain inner-knowing.

To get to that point however, you have to battle with the challenges of life that you subconsciously create.

These challenges are reflected in the various bas-reliefs etched on the walls of the gallery around each of the three shrines in Prambanan and recite in images the iconic Hindu epics, Ramayana and Bhagavata Purana.

The bas-relief you see below shows two men wrestling. This reflects the fight you have with the two voices in your head, the two aspects of your ego which Sigmund Freud called the id and the Superego.

The same principle is represented in other traditions by two warring brothers; Cain and Abel, Remus and Romulus, Set and Osiris. 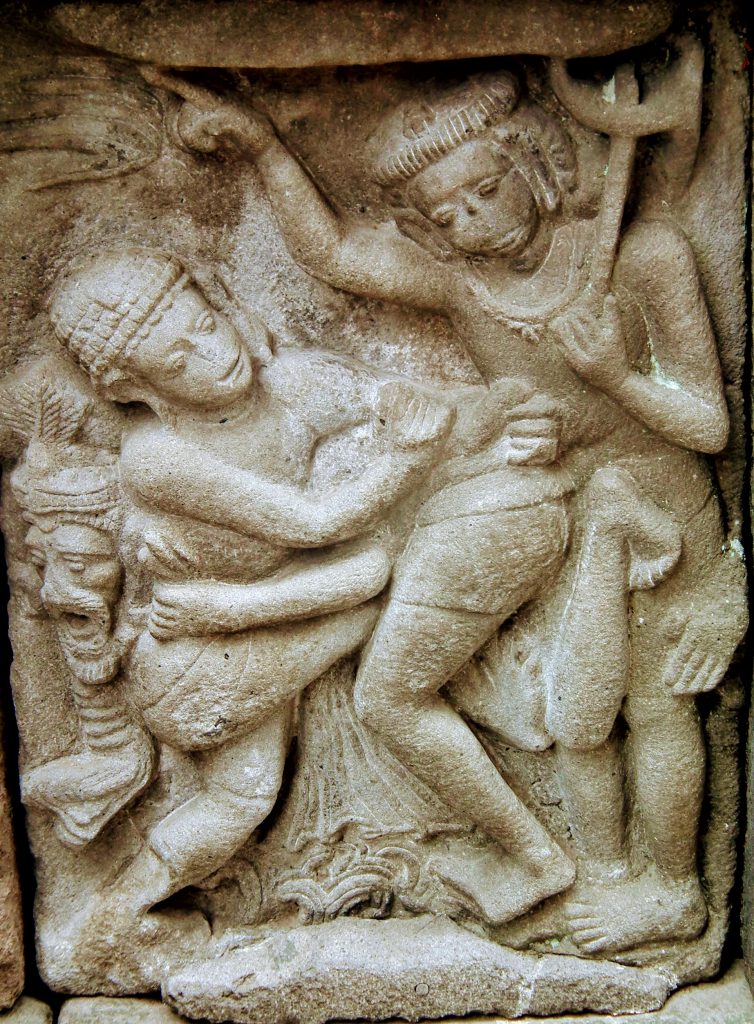 Sigmund Freud called the lower conscious nature of the subconscious mind the id which causes cravings and leads you into moments of weakness. At the higher end of the spectrum is the Superego which enables you to rationalise and determine the best cause of action. The Superego is the aspect of your consciousness that questions the choices you make that are rooted in ego.

This concept is often reflected in ancient mythologies by battles between gods and demons, warring brothers or a hero defeating a beast. Or as we see in the Indonesian legend below, the conflicts between kings and princes.

The Legend of Rara Jonggrang in Prambanan Temple

Prambanan Temple is also referred to as the Rara Jonggrang Temple in association with the mythological hero of the same name in Indonesian folklore.

Heroes in myth are you – the reader. The Gods are attributes and aspects of your personality – or in other words, the subtle energies that manifest as strengths and weaknesses – the archetypes described by Carl Jung.

The legend of Rara Jonggrang links the Prambanan Temple with the nearby Sewu Temple a short walk away. Sewu Temple is less crowded and well worth a visit.

Rara Jonggrang was a beautiful princess who was pursued by Prince Bandung Bondowoso (prince meaning an initiate/unenlightened individual with potential) – or in other words the habitual mind that is not illuminated.

The prince was from a neighbouring kingdom and asked for the princess’s hand in marriage, but she refused him because he had killed her father King Boko. Kings are the reigning attribute or trait as seen in Lord Vishnu – the maintainer.

King’s are ultimately replaced by princes’ just as old values are replaced by new views of the world. In this case, the king was being replaced by an enemy.

Bandung Bonowoso insisted that the princess become his bride and forced Rara Jonggrang into marriage – this is the alchemists “chemical union” between male and female principles (mind and heart).

The princess had no option other than to conceded her hand in marriage – but said she would only keep her word on one condition – that Prince Bandung builds her a thousand temples in one night.

This part of the story is reflected in the Sewu Temple. 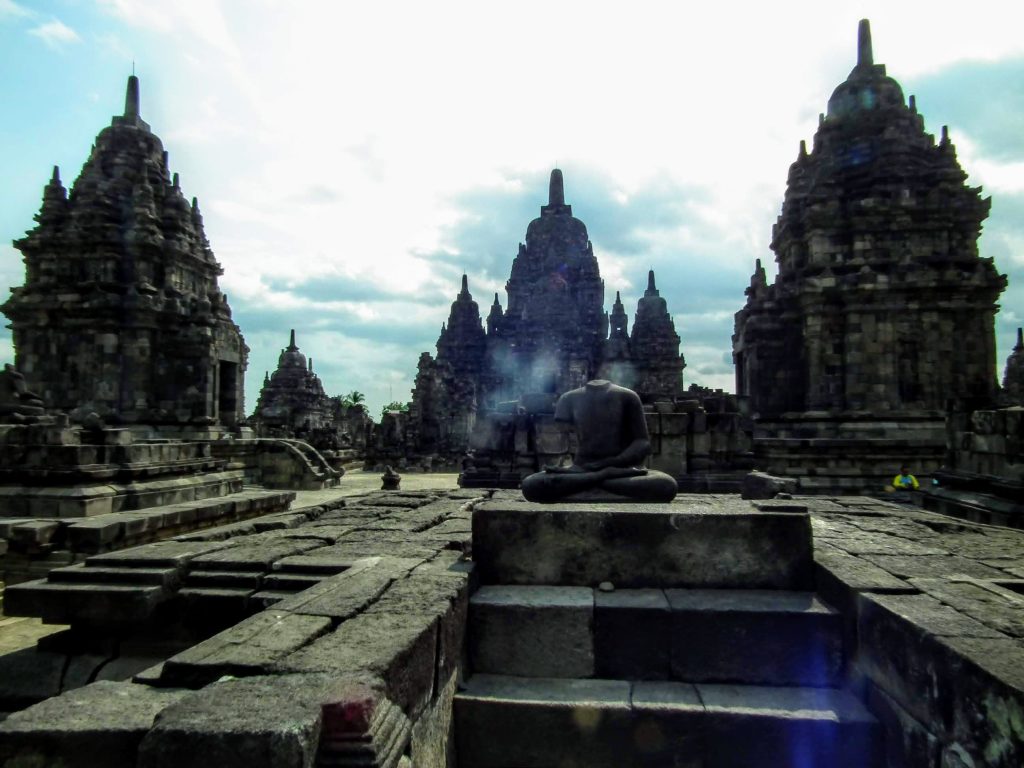 The prince entered into meditation – set an intention – and called upon supernatural beings to help him complete the temple project. Just before daybreak, he had just one more temple to build.

To prevent him, the princess woke the palace maids and ordered the women of the village to pound rice and set a fire in the east of the temple so the cocks would think it was daybreak and sound their call.

Subsequently, the spirits returned to their den underground without finishing the project. When the prince discovered the ruse of the roosters, he was furious and turned Rara Jonggrang to stone.

The princess is said to be the statue of Durga which is housed in the north facing chamber of the Shiva Temple. Sewu Temple is the unfinished temple that was abandoned by the spirits.

So why is this legend so poignant to the symbolism in the Prambanan compound?

First of all, it reveals that greed and desire [of Prince Bandung Bonowoso] can hinder your progress in the quest to discover your Buddha Nature – the 1000th Temple which in gematria equals one – the one True Self that is liberated from ego.

This, of course, is a good lesson. What disturbs me is the link between the princess and the statue of the goddess Durga.

In Hindu mythology, the goddess Durga is an attribute of Lord Shiva. She represents the destructive forces of energy that enables you to overcome weaknesses; bad habits, poor attitude, limited views etc. 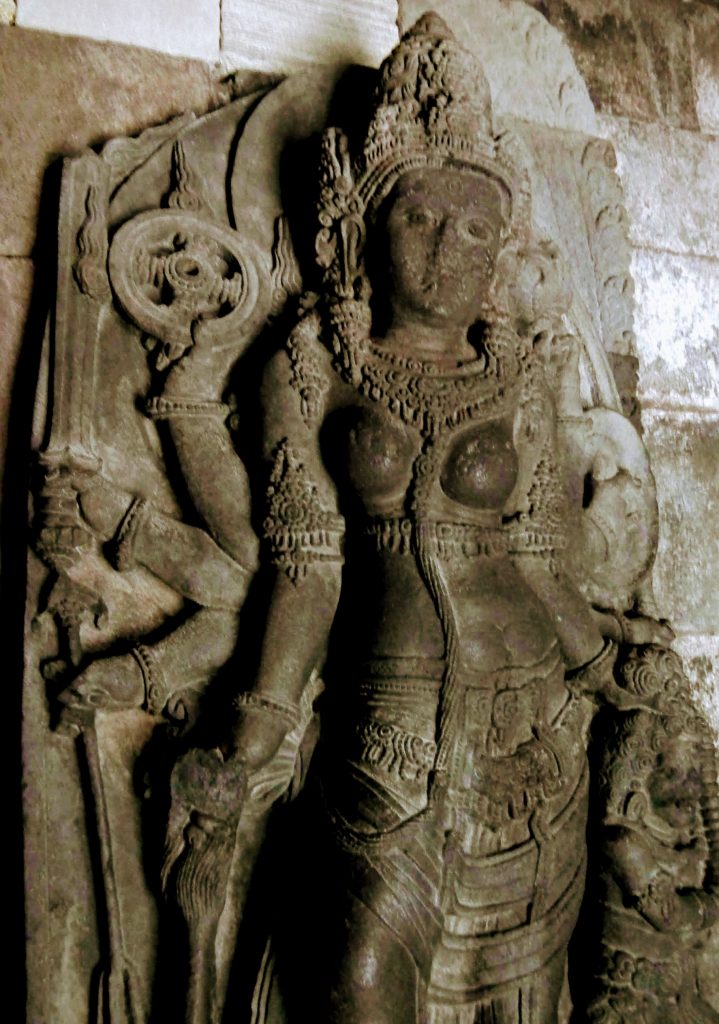 In essence, the goddess Durga carves out the path that enables you to create new energies and progress in life. This is an essential quality you need in order to grow and develop.

In the Indonesian legend of Rara Jonggrang, the princess also represents the qualities you need to reach or create perfection – reflected in her promise to Prince Bandung Bonowoso to complete 1000 temples – The True Self.

The marriage would essentially have been the heart and the mind coming together in harmony whereby all your creative energies are balanced.

However, the princess is turned to stone, the process of petrifaction – a natural process whereby wood, usually the lower trunk of a tree, turns to stone.

When a character is turned to stone in mythology, it symbolises an inability to develop. It reflects the limitations and destabilising fears that are often projected on to us.

When the flow of energy is obstructed it can also prevent you from taking action you know you need to take. You find yourself procrastinating because you are afraid or do not have the motivation to take the next step.

In Prambanan Temple, the petrified princess in the form of the goddess Durga is stored on the north chamber. The symbolic meaning of the north represents the subconscious mind whilst you are sleeping. This is when your energies transform.

So the statue of Rara Jonggrang-Durga represents your inability to destroy old value that does not serve you in order to create the qualities of character you need to develop.

Understanding the esoteric meaning of ancient symbolism not only helps you learn how to improve yourself, but also gives you the power to protect yourself from the masters that use you as a puppet.