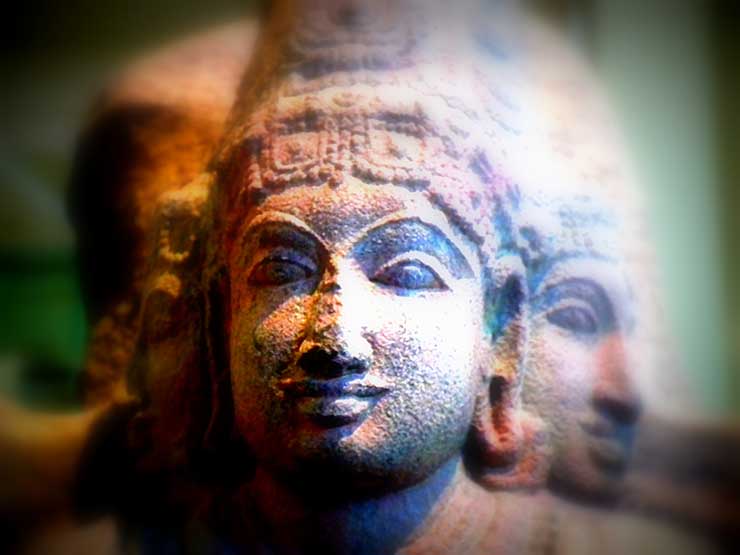 The Symbolic Meaning of Brahma and Saraswati in Hindu Mythology

There are 33 Crore Gods (or 330 million – 1 Crore equals 10 million) in the Hindu Pantheon, but the three most important are the famous Trimurti; Brahma, Vishnu and Shiva.

Each God of the Hindu pantheon represents a significant aspect of human life on a physical, emotional and spiritual level. When determining the symbolic meanings of the Hindu Trinity, the consorts should also be brought into the fold.

And so here you will learn about the symbolic meaning of Brahma and his daughter-wife Saraswati, a complex and mysterious couple. Hindu's do no honour these two gods with the same intensity as Vishnu and Shiva but they are actually more important than some commentators give them credit for.

Saraswati shares some of the limelight, but poor old Brahma is widely overlooked because he is considered the lesser of the three gods in the Trimurti. There are only three known temples in the world dedicated to the “Creator God”.

What do Brahma and Saraswati Represent?

There is some confusion about what Brahma actually represents. The Vedas and the original Brahmanas do not mention God but describe his existence as a golden-embryo.

In the earliest myths, Brahma appears from the cosmic egg but later is said to emerge from a lotus flower that stems from the belly-button of Lord Vishnu.

The differences make symbolic interpretation somewhat confusing given Brahma is credited as the Creator God rather than Vishnu. The latter is given the responsibility of maintenance.

The Narayana Upanishad does, however, identify Vishnu as being the ultimate law of existence, and identify the infinite source of all space, time and causation with Brahma, thus defining their roles.

Essentially, the symbolic meaning of Brahma relates to the law of nature, the inherent intelligence and the divine consciousness. Vishnu is the mysterious unseen force that restores harmony after chaos.

As the author of creation, Brahma adopts some of the qualities of Vishnu, but essentially he is the “Supreme Seed” from which creation manifests. In terms of the human psyche, Brahma is thought.

Brahma is also named as the “Universal Mind,” the source of all thoughts and ideas, Jung’s Collective unconscious, which are embryos of the creative process we send and receive from the ether.

The principles associated with Brahma sit perfectly with his consort Saraswati, goddess of learning and creative knowledge. Whereas Brahma is the pure creation of things, Saraswati organises and refines.

Together, the symbolic meaning of Brahma and Saraswati represent the functionality of the brain, man’s ability to create ideas and formulate action through analytical thought and invention.

The Creation of Saraswati

Saraswati is the creation of Brahma, although according to legend there are several versions.

Like we find in the Greek and Roman myths with the stories of Zeus and Athena, Jupiter and Minerva respectively, Saraswati is the daughter of Brahma and springs from her father’s head.

Another myth describes Saraswati being born from the mouth of Brahma in the form of creative speech as he undertakes the task of forming the world. She is also said to have emerged from Brahma’s semen after he masturbated into a pot.

The Matsya-Purana describes how the Creator God divides his body into two halves whilst meditating. The female dimension of his polar opposite is Saraswati.

The roots words for Saraswati come from the ancient Sanskrit. “Sara” meaning essence, and “Swa” meaning self. The Goddess, therefore, epitomises the essence of the self.

Essentially Saraswati symbolises the creative power to Brahma’s embryo, which is why she is particularly worshipped by thinkers, scholars, writers, scientists and artists.

Hindu Gods are typically depicted with four arms and hold symbolic objects in each hand. The symbols have a significant meaning associated with the principle meaning of God.

The divine couple, Brahma and Saraswati, represent the mind, knowledge and intellect. They are both often depicted with the Lotus flower which symbolises knowledge and supreme reality.

Brahma is typically found seated on a lotus flower, symbolising the living essence of the cosmic universe. He also holds a lotus flower in his fourth hand, usually the back left representing intellect.

His back right hand represents the mind, the front left signifying self-confidence and his front right, ego. You will sometimes find Brahma seated with a sword or other sacrificial implement in his front right hand to denote the need to make self-sacrifices to defeat the ego.

When not seated on a lotus flower, Brahma is found sitting on his flying vahana, the swan, a symbol of grace and shrewdness. The swan is said to be able to determine right from wrong, good and bad.

Brahma also has four heads which represent north, east, south and west. They also represent the four elements, as he used to have five heads, but Shiva destroyed one in a rage, thereby killing Brahma’s spirit.

Unsurprisingly Saraswati shares some of the same symbolism as Brahma. Her back arms represent her activities in the physical world and her front arms the inner world.

The arms and symbols on her left side symbolise the qualities of the heart whilst those on the right represent mind and intellect.

Saraswati also represents vibration and is often found seated with a musical instrument. This also means the individual must tune their mind into higher vibrations in order to find harmony in the world and attain a deeper understanding of life.

Saraswati is sometimes pictured with a peacock denoting death and rebirth. When individuals apply the principles of learning and vibration which Saraswati signifies, transformational growth is inevitable.

In Hindu myths, Brahma is a somewhat troublesome character. He can be argumentative and fickle, often invoking rage in the other two Trimurti and granting boons liberally to anyone who praises him.

In one legend, Brahma and Vishnu argue over who is the more important God. Shiva intervenes and sets a test to determine who is the greater God.

Transforming himself into the Lingam, a shaft of fire that stretches from the Heavens to the Underworld, Shiva challenges the two Godheads to find the end.

The pair search for years in both directions before they realise the Shiva Lingam had no end.

At this point, Vishnu recognises that Shiva is the greater God, whereas Brahma attempts to cheat by bribing the flower of Ketaki to attest Brahma found the end of the lingam.

Recognising the deceit, Shiva becomes very angry and punishes Brahma by declaring he will never be worshipped by human beings. Since this legend was published, Hindus gradually ceased to worship Brahma.

The symbolism is an indication that sometimes our thoughts deceive us. The lesson then is to become more consciously aware of thoughts coming from your higher consciousness and knowing which to trust.

When Brahma created Saraswati, who is known as Shatarupa, Savitri, Sandhya Brahmi and Gayatri, depending on which myth you read, he falls in love with her.

But Saraswati spurns his adoration and runs away. In an attempt to find her Brahma develops four heads, representing the four directions so he could see her wherever she went.

When Saraswati went upwards to escape Brahmas attention, he develops a fifth head, but this is destroyed in the Puranas when Shiva burns off the head after Brahma speaks disparagingly about him.

A theory of psycho-analysis says that when we go to sleep, our astral bodies leave our physical body and explores spiritual realms.

Whilst in these other realms our sub-conscious is creating our future based on the energy we have projected through thoughts, emotions and actions.

Following years of extensive research, Dr. Joseph Murphy came to the conclusion that by concentrating on the things you most want to manifest in your life just before you go to sleep.

This is why people say “be careful what you wish for”!

Ancient mythology alludes to the same thing. It is written that when Brahma goes to sleep, the world is consumed by fire and subsequently restored when he wakes.

This is symbolic of new circumstances and experiences coming and going in your life based on what you have requested from the Universe.

Brahma also created the Saptarishi, seven great sages that help him create the universe. The Saptarishi represent the seven chakras which can also be used for creating and destroying the things you want or do not want during meditation.

The symbolic meaning of Brahma and Saraswati clearly has a far more important role to play in life than currently afforded by Hindu devotees. But then again, the authorities like to do their best to discourage anybody from thinking for themselves.

[Whisper] Don’t let them get to you…

Master Mind Content is a leading authority in decoding ancient symbolism . Our research unveils the secrets to understanding and taking control of the the subconscious mind, channeling energy to self-heal and effectively using universal laws to fulfil your potential.
« The Symbolic Meaning of Lord Vishnu and Lakshmi
The Symbolic Meaning of the Aum »