Several weeks ago, I published an article about the Hindu god, Agni. In the article, I presented evidence the ancient Sanskrit writers of India understood consciousness and the psychology of humans. The esoteric symbolism in the Rig Veda indicated the wise men of India understood the nature of Self and ego at least three thousand years before Sigmund Freud established his id-ego-superego thesis of psychoanalysis.

In the legends of Mitra-Varuna, there is more evidence that our ancient ancestors understood the subconscious mind. The symbolic meaning of Mitra-Varuna in the Rig Veda explains the nature of the Unconscious Mind.

In his writings Jung warns of the dangers the shadow presents:

“…it is a frightening thought that man also has a shadow side to him, consisting not just of little weaknesses and foibles, but of a positively demonic dynamism.” ~ Carl Jung, On the Psychology of the Unconscious

The wise sages of old were also aware of the destructive qualities that reside deep within your subconscious. One of the mechanisms they used to demonstrate this was through the esoteric symbolism in the stories of Varuna and Mitra.

In ancient symbolism, the character of Mitra was used to represent the morning star. He is a solar deity, one of the 12 Adityas mentioned in the Rig Vedas. He is also one of the seven deities that preside over the day thus known as Lord of Light and grants wealth (of knowledge).

In Sanskrit, Mitra means “an ally” or “friend.”

The symbolic meaning of Mitra connects him with harmony and the integrity of truth that keep relationships strong. Hindus invoke this god when signing a business contract. He is also the god of friendship together with other important aspects that are required to maintain a peaceful life. 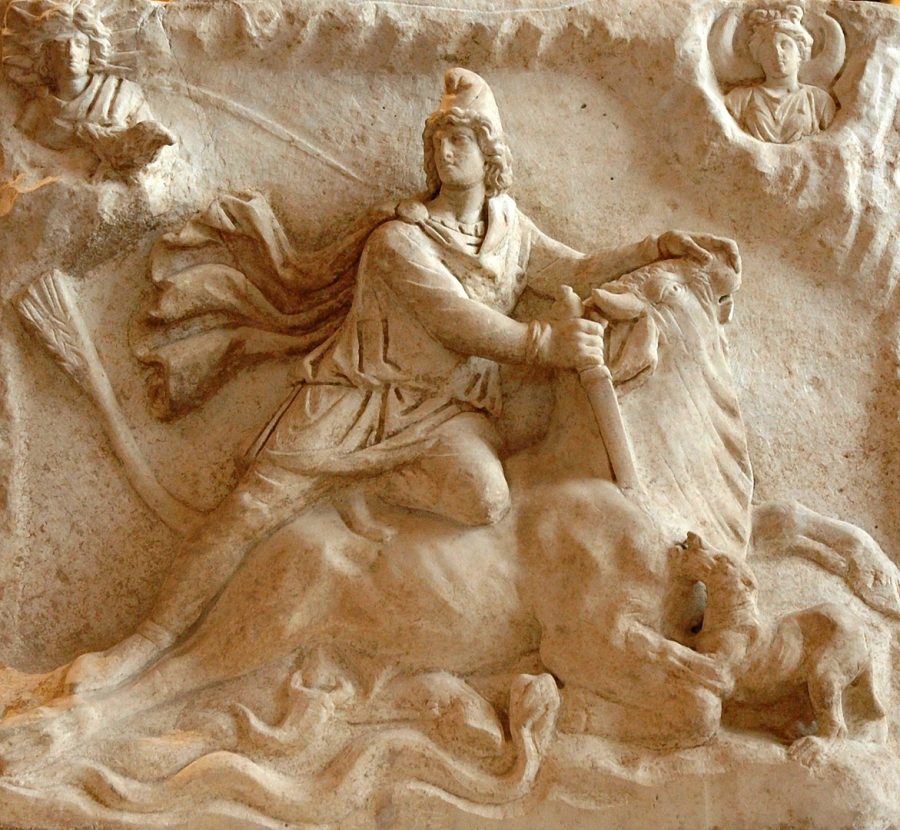 In Hindu mythology, Mitra and Varuna are sometimes regarded as twins or as an androgynous entity. Whilst Varuna is seen as the monarchy, Mitra is the priesthood and is responsible for balancing day and night, good and evil.

When you apply the character of Mitra in Hindu myth to Jung’s model of the human psyche, it becomes clear that ancient writers understand the importance of conscious awareness. Good people, bring good tidings.

But what is conscious awareness?

The simple answer is to be consciously aware of yourself; the contents of your mind, how you feel towards yourself and others, and the actions you perform. Are you creative or destructive?

As a sun god, the symbolic meaning of Mitra means to have an understanding of the Self. Varuna, on the other hand, is an aspect of the Unconscious that, as the Jungian psychoanalyst, Marie-Louise von Franz points out, can either be destructive or rewarding.

“The archetype is the promoter of ideas and is also responsible for the emotional restrictions which prevent the renunciation of earlier theories. It is really only a detail or specific aspect of what happens everywhere in life, for we could not recognise anything without projection, but is it also the main obstacle in arriving at the truth.” ~ Marie-Lousie in Franz, Alchemy: An Introduction to the Symbolism and the Psychology

What does Varuna Represent in Hindu Mythology?

There are two aspects to Varuna is ancient symbolism. As an Aditya, he was elevated from an Asura who is part god-part demon. But solar deities are also noted as “Sovereigns of the Cosmos” and can be both terrible and magical.

Like Mitra, Varuna is an “omnipresent” and “omniscient” god which reflects they are an element of human consciousness and not rooted in the mind. The shadow self is part of your subconscious that you are not always aware of.

As Jung pointed out:

“if an inferiority is conscious, one has the chance to correct it…if it is repressed and isolated from consciousness, it never gets corrected.” ~ Carl Jung, Psychology and Religion

Varuna is chief of the Adityas and represented the ‘dark side of the sun’ thus presided over sunset and the coming of the night. It is said that the moon moved by his will alone. The moon represents emotions and the mysterious aspect of your unconsciousness. You may feel that something is there, but you’re not sure what that something is.

Varuna lives in the kingdom of Sukha which represents happiness. He lives in a thousand-columned golden mansion and observes humanity.

The Rig Veda tells us Varuna, “extends the air above the trees; he has put strength in horses, milk in cows, willpower in hearts, fire in waters, the sun in the heaven and soma upon the mountain.”

Although Varuna represents the shadow self where the base consciousness of your animal instincts resides, tapping into this aspect of your character can bring happiness. We call it fun, letting off steam; getting sloshed. In Hindu art, Varuna is often pictured with reptiles – symbols that denote the capacity for man to transcend the material plane. 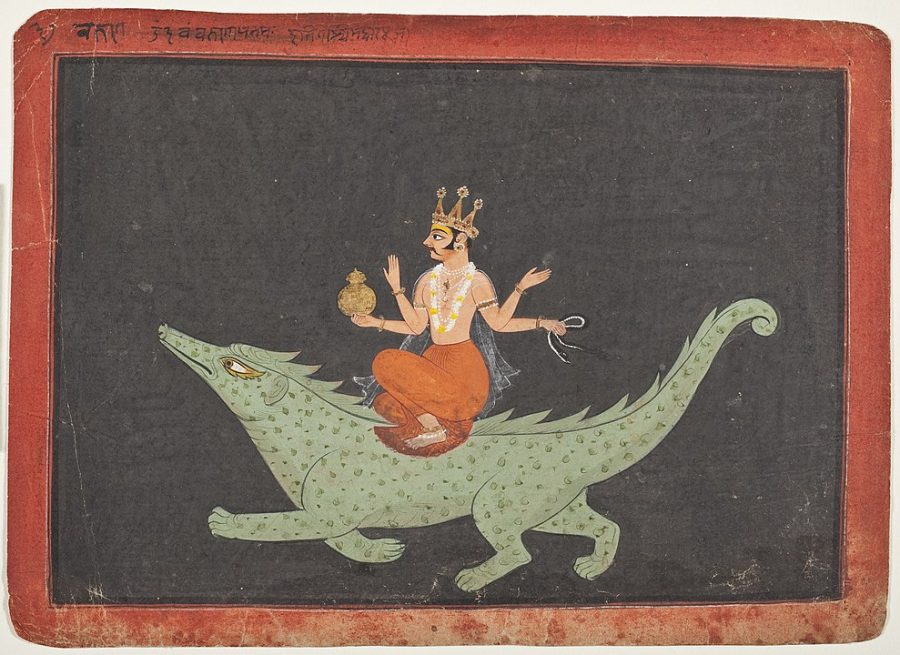 Your dark passenger is not a piece of your consciousness that should be dismissed lightly. Rather, it should be embraced as it helps you to discover negative aspects of yourself.

Providing you can control the beast through the dharma of Mitra and bring good and bad into balance, there is no harm practising the seven deadly sins and the seven heavenly virtues.

Even your dark passenger is with you to help expand your conscious knowing. After all, it is consciousness and consciousness wants to evolve.

If you limit yourself to only following the light, how can you experience the rich and vast existence that you have been granted with on earth? Varuna grants wealth to the divine as well whilst protecting cattle – cattle representing your animal instincts.

The twins, Mitra and Varuna teach lessons of morality. Sometimes you have to understand your dark side and be consciously aware of the evil that resides in you in order to take control of it.

In the earlier legends of Hindu mythology, this connection with morality saw Mitra-Varuna as an extremely powerful god, arguably the most important although there were more popular gods such as Indra and Agni that are mentioned much more often.

But Mitra-Varuna were considered as the moral laws of the Universe that guard justice and truth. Varuna is described as having thousands of eyes (the stars) and is the god that hands out punishment when judging humans on the merits of their actions (dharma).

The role of Mitra-Varuna was later taken on by the sons of Surya, Yama the god of death that represents Karma, and his twin sister, Shani or Yami who represents dharma, the practice of living a righteous life, a likeness we find reflected in Mitra.

In religions, sin is recognized as a violation of the pure mind, and Varuna helps us to shatter the illusion your mind is programmed with as you grow up. The culture of sex and violence in TV, mainstream films and many other sources merely serve to provoke the desires of your dark passenger.

But as Lord of Light, the symbolic meaning of Mitra-Varuna is that part of your consciousness that can identify the error of your ways when you take things too far. Although the point of reaching self-realisation may arise from an archetypal projection, the Truth delivers you from the bondage of the ego-mind. It does not mean that you are a bad person, you are just experiencing other dimensions of your conscious reality.

The Shadow Self in Other Ancient Cultures

When I was researching my first book, “What Modern Man Can Learn From Ancient Civilisations,” I noticed the ancient Maya had an obsession with Venus.

When it comes to the Maya civilisations, scholars have only gotten as far as pushing the astronomy connection and at the time, I missed the connection Mesoamerican cultures used astronomy in myths as analogies of human consciousness.

In the legends of the Sun God, Quetzalcoatl and his dark twin, Xolotl, the brothers are referred to as the morning star and the evening star. In the myths of the ancient Maya, the stars’ reference Venus which can be seen at certain times of the year in the morning sky and the evening sky.

Xolotl ruled over Venus in the evening, thus representing the shadow nature of your psyche. Quetzalcoatl, known as the “precious twin,” resided over the “light” of the day when it is possible to see things more clearly. In other words, you are consciously aware.

Writers from the Greco-Roman period used details of astronomy in myth as well as we find in the Goddess Venus/Aphrodite. Primarily known as the goddess of love, she also has a jealous and devilish side that she uses to punish mortals and other gods.

Other Greek legends also describe the twins of Apollo – the Sun God – and Artemis, the Mistress of Animals as opposing elements of your higher and lower consciousness.

In Persian mythology, there is the righteous Gilgamesh and his wild brother Enkidu, whilst the Zoroastrian legends talk of Ahura Mazda, the creator of light, truth and goodness, battling with his twin enemy, Ahriman, the spirit of darkness, lies and evil.

There are many ancient myths that use twins as symbolism to reflect the dual sides of your character. The good twin usually overcomes the evil twin. Even the story of Cain and Abel in the Bible’s book of Genesis, tells this same story.

Cain and Abel are the first creations of Adam and Eve, creations in this sense meaning ideas which are born in the early stages of an idea. Your understanding becomes clearer the more information and experience you have.

Genesis tells us that Abel looks over the flocks. This means he is associated with animals – the lower consciousness nature. Cain, meanwhile, tills the soil, putting in hard work to produce the harvest. He is thus related to nurturing and fertility.

Yet the Lord (you) favours the offerings of Abel (fun), which caused Cain to be jealous. So he kills his brother but is then cursed. By killing Abel, Cain destroys his shadow self from which he can learn to become a better human being.

When Jung wrote about the shadow self, he said the way to recognize your dark passenger is to see the reflection of your hidden soul in the minds and actions of others. Shadows project themselves onto reflective surfaces, and as beings of light, you see your shadow self in others.

“Whoever looks into the mirror of the water (the Unconscious) will see first of all his own face. Whoever goes to himself risks a confrontation with himself. The mirror does not flatter, it faithfully shows whatever looks into it; namely, the face we never show to the world because we cover it with the persona, the mask of the actor. But the mirror lies behind the mask and shows the true face.” ~ Carl Jung, The Archetypes and the Collective Unconscious

Master Mind Content offers in-depth symbolism courses which explain the esoteric meaning of symbols found in world mythologies. When you understand the meaning of symbols and how they relate to thoughts, emotions and actions that you experience, you can use symbols and numbers to make better decisions and improve your quality of life.