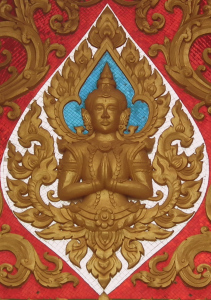 The Three Jewels of Buddhism in Everyday Life

Before you can be formally recognised as a Buddhist, initiates are encouraged to “take refuge” in the Three Jewels of Buddhism. But in reality, monkhood is not necessary.

However, it is central to monastic ordination ceremonies and initiates are require to have a master. This is purely for guidance. The three jewels of Buddhism is not typically something you can teach yourself.

But becoming a Buddhist monk is not easy; there are strict rules to follow. Most monasteries rise at 3.30 or 4am to pray to Buddha. Monks eat two meals a day, and not after 12pm. They promise not to harm any living creatures (including pesky mosquitos) and must abstain from sex, alcohol and mind-enhancing drugs.

Of course, you do not have to become a monk to practise Buddhism, but taking refuge in the three jewels requires a certain amount of dedication, patience and learning.

Buddhism values life choices and encourages practitioners to cultivate wisdom and compassion. It teaches that by taking responsibility for your actions, you receive better rewards in accordance with natural law. This is the theory of karma.

The triple gems of Buddhism do not solely focus on the application and knowledge of the practitioner, but also the willingness to teach others. The three qualifying qualities are:

Buddha means “the enlightened one.” We are all born Buddha’s but as children do not realise this. As we grow older and become conditioned by a toxic education system, media, phoney leaders and materialism, we forget we are blessed with innate powers of higher consciousness. Instead, we become cattle.

Unless you have illuminated parents or a real spiritual teacher and not some indoctrinated church vicar, it takes a lot of hard work to reprogram your adult mind and rediscover the pure consciousness you were born with.

The majority of people develop faulty hard-wiring and rather than becoming enlightened, stay ignorant and wallow in base-consciousness like a beast. This generally leads to mental breakdowns and terminal illness.

However, the world is slowly waking from its slumber and life philosophies are beginning to creep back into public consciousness. The knowledge of consciousness which leads to Buddha state is creeping to the surface.

The corrupt teaching of higher consciousness that goes under the name of “religion” and “spirituality,” will eventually wither and die.

Many people are starting to wake up to the fact that expanding conscious awareness relies on integrating unconscious archetypes into the conscious mind. You just need to know where to look.

But to coin a phrase, “the truth is out there.” Actually, it’s in you, but you often need guidance from external sources to help find it.

The truth is that you are pure consciousness and when you learn to take control of your own mind you will find your way back to source. This is what it takes to be a Buddha. It is symbolised by fork lightning.

Like every concept in Buddhism, Dharma comes straight from the Hindu philosophy and essentially describes the factors of existence. In other words, the law of Karma that dictates every action you make now has a reaction later. This is cosmic law and there is no escape.

Dharma refers to ethical rules and the ability to control the mind; thoughts, motives, actions. Essentially it is your duty in life, and in Buddhism, it is symbolised by the Dharma Wheel and taught in the Noble Eightfold Path.

In brief, the laws of nature determine your circumstances based on whether you have carried out your Dharma in accordance with rules of what is right and wrong. Acting in good faith and with the best intentions brings prosperity. Otherwise, you suffer the consequences. Or so the theory goes.

You could say that Dharma is Karma, but really Karma is the result of Dharma. All these regurgitated philosophies and theories are merely labels. Ignore them.

Gautama Buddha said, “my teachings are not a philosophy…but to help others have a direct experience of reality.” (Old Path White Clouds by Thich Nhat Hanh). It is the path of truth that takes you home to absolute consciousness.

To be Sangha is to be a Buddhist practitioner that teaches others the art of living to others using the teachings of Gautama Buddha. They are tasked with helping their student attain enlightenment.

Singing the Sangha often means the master follows the path of a monastic life, although there are many Buddhist teachers in various parts of the world that live perfectly a normal life.

The word ‘Sangha” is an ancient Sanskrit word meaning assembly or company. Essentially, it is a community of spiritually enlightened Buddha’s committed to pulling people from samsara (illusion/hell) into satori/nirvana (the truth/heaven). You will probably find Sangha’s in your local Buddhist Centre.

Sangha is symbolised by the conch shell which means to speak the truth. When you speak the truth with the right intention, life becomes much easier. People respect you and you generally get what you need without even trying.

The three jewels of Buddhism sounds much more difficult than it actually is if you dedicate time to practice and get over the initial hurdles. It is not necessary to denounce an ordinary lifestyle in the way monks do. That is a personal choice.

If you choose to be precious, you will still shine leading a normal, everyday life. So be a jewel. Actually, be three.

Master Mind Content is a leading authority in decoding ancient symbolism . Our research unveils the secrets to understanding and taking control of the the subconscious mind, channeling energy to self-heal and effectively using universal laws to fulfil your potential.
« The Symbolic Meaning of Two Golden Fish in Buddhism
What’s Your State of Mind? The Esoteric Meaning of the 14 Lokas in Hindu Mythology »