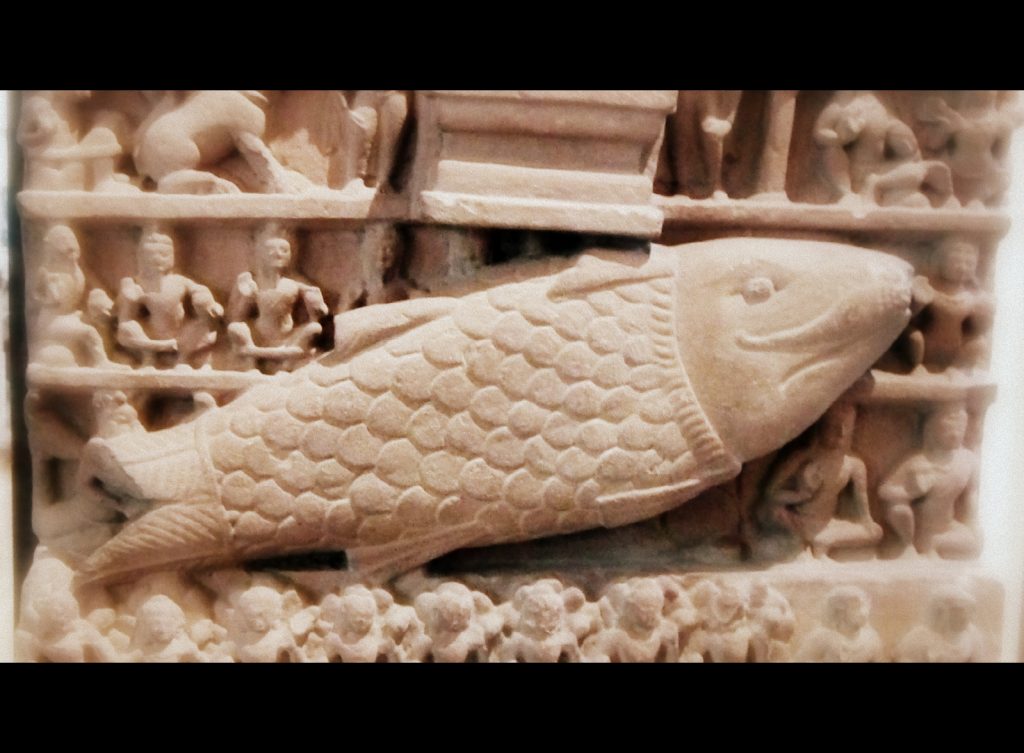 The Symbolic Meaning of Two Golden Fish in Buddhism

The golden fish in Buddhist symbolism has been lifted directly from ancient Vedic mythology. The Hindu God, Vishnu turns himself into a fish, Matsya who rescues Manu, the first man from a flood.

The story of Matsya and Manu is a Hindu creation story which shares many similarities with the biblical story of Noah. But fish symbolism is found in many cultures throughout the world to represent creation.

The mainstream interpretation is of fish symbolism is they represent happiness and good fortune. As the fish avatar Matsya, Vishnu rescues mankind thus rewarding mankind with life and prosperity.

Buddhists like to think by practising dharma they will have good luck as they do not fear “drowning” in the ocean of suffering and can choose their rebirth like fish in water.

The two fish are associated with the sacred rivers of the Ganges and Yamuna in India – life-giving water that helped civilisation thrive along their fertile banks.

In turn, the rivers symbolically represent the lunar and solar channels of the nostrils which determine the alternating rhythms of breath; inhalation and exhalation.

Furthermore, it was known to Vedic medicine men that one nostril is always partially blocked so that we take more air in through one nostril at any one time.

In mainstream Buddhism, fish symbolism also relates to happiness because they have the freedom of the water, together with fertility and abundance because of the rapid rate in which fish breed and multiply.

It is said the two fish depicted in Buddhist iconography is because fish often swim in pairs. I am not convinced this is true based on my casual observations of fish over the years…

…nor am I convinced about the orthodox interpretations of fish handed down by the echelons of Buddhist philosophy. Let’s take a closer look!

The Real Meaning of Fish in Esoteric Symbolism

It is true that fish represent the bringing of life and prosperity in symbolism, but not quite in the way organised religions want you to believe.

They are of course associated with water, from which all life is said to have developed and rivers are critical to flourishing civilisations even today.

In connection with water, fish also represents creation. Water is an element that creates life. A human foetus lives in water in the mother’s stomach.

The birth of a healthy child does bring happiness and when the child survived in ancient times, it was considered good luck and brought prosperity to the family. Children worked for the family and continued the bloodline.

Two fish are not only found in Buddhist symbolism, but also in other cultures such as this ceramic bowl at Nazca in Peru.

The reason for two fish is because they represent male and female counterparts, opposing elements that come together to create an end product. This is why the fish Matsya appears in the Hindu creation story.

We find the same principles in modern traditions of marriage when male and female join together in (sexual) union. Positive and negative charges of energy also bond to form matter and creation. Whereas water represents consciousness, fish represents the elements that create the world. Our world. Your world.

Plaques and ornaments with symbols of two fish are typically offered to newly married couples in China as a symbol of conjugal rights and fidelity.

The correct interpretation of this marriage symbol is not entirely about sexual intercourse between man and wife, but the “chemical wedding” of male and female energies and the union of mind and heart.

When the thought and emotion are brought into balance, we experience higher consciousness which enables us to act with more clarity and rationality.

In this higher conscious state, we make better decisions that lead to the creation of the things we want in life, rather than the things we don’t want. And this brings about prosperity and good fortune.

When the right/left hemispheres of the brain are unbalanced we are prone to suffer from mood swings and confusion. Feelings of anger, hatred, jealousy and other fear-based emotions lead us into making wrong choices.

The two golden fish, therefore, represents the ability to create through the balance of body and mind which are the vehicles that help us reach higher-consciousness – what Buddhists call Nirvana or Samadhi.

In Vedic chronology, Matsya also represents the first stage in the evolution of life. From an esoteric point of view, this is the birth of a new idea that can be developed to create something you want in your life.

So two fish symbolise the ability to create good fortune and prosperity in your life – and this ability is innate within you. How much you achieve depends on how balanced you are in body and mind.

Master Mind Content is a leading authority in decoding ancient symbolism . Our research unveils the secrets to understanding and taking control of the the subconscious mind, channeling energy to self-heal and effectively using universal laws to fulfil your potential.
« The Symbolic Meaning of the Victory Banner in Buddhism
The Three Jewels of Buddhism in Everyday Life »