The Symbolic Meaning of the Vesica Piscis

The Vesica Piscis represents balance and creation. But as I will demonstrate in this article it has a deeper meaning – that creation is the result of consciousness. Perfect creation requires a balance of male and female energies.

What is the Vesica Piscis?

Most people in the West will recognise the Vesica Piscis as the Christian symbol of Jesus. But the symbol predates the church by thousands of years. In the East and Africa, the symbol is known as the Mandorla.

The origins of the vesica piscis is not known. Modern-day neo-pagans claim the symbol is Germanic as it was used by Norse peoples. But the symbol can also be traced to Pythagorean Greece, ancient Egypt, Mesopotamia, India and Africa.

Regardless of its origins, the symbol carries the same meaning – creation. In ancient Greece, this symbol was called the Ichthys, the offspring (creation) of the Goddess Atargatis.

In addition, I will show esoteric symbolism is being used for the same meaning today by modern civilisations. The Vesica Piscis is not alone here – all the symbols used by modern “authorities” have their origins in ancient cultures dating back thousands of years.

Each of the cultures that used or use the Vesica Piscis as a symbol attribute a particular meaning, all of which are true – as they all mean the same thing once you dig under the roots:

What follows is an explanation of how each of the four meanings above has the same meaning: balance and creation. Furthermore, creation relates to consciousness.

Science shows us that nature has to find balance in order for creation to flourish. We see this in the sub-atomic particles of an atom. Male protons (positive charge) bind with female electrons (negative charge) to try and find equilibrium.

When positive and negative charges of an atom find a balance, a perfect creation is formed. When they cannot find equilibrium, the female electron will look for another proton.

If the atom cannot find equilibrium, the neutron kicks in and it neutralises, but only if there is more or less of a balance of electrons and protons. If there are more of one than the other, an imperfect creation forms.

The Vesica Piscis is the shape in the centre of two interlocking circles. Let’s say one of the circles is the male energy and the other is the female energy. The centrepiece is a perfect creation. But only when the circles are symmetrical – balanced. 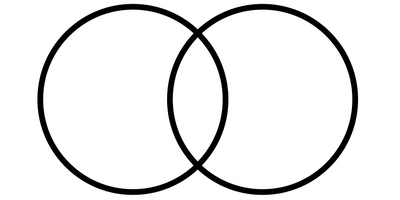 You can see from the picture above, the centre is an almond shape. I will come on to that later. But can you also see that the symbol above makes the “Ichthys” – the fish symbol used to represent Jesus in Christianity.

If not, check this out: 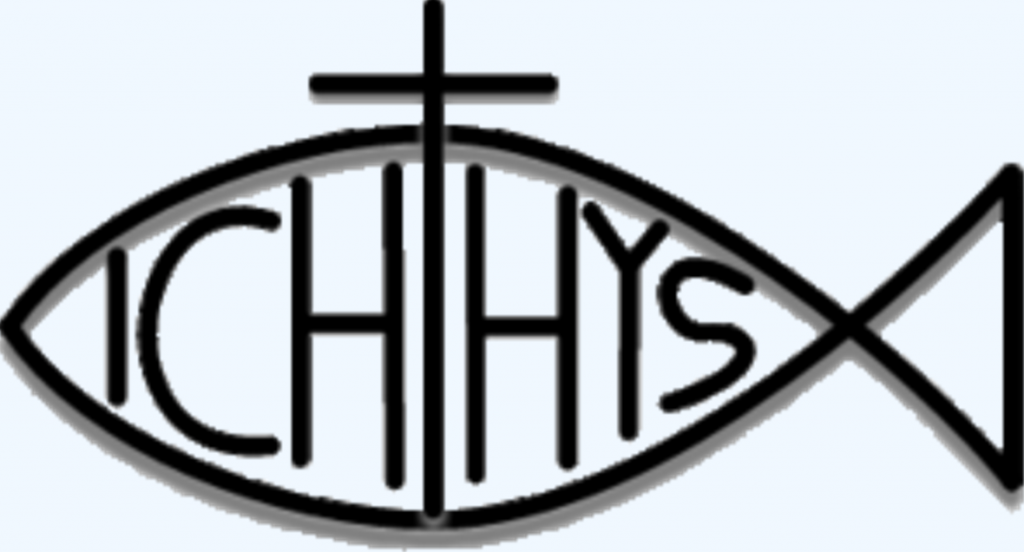 I would argue the two circles also represent the unconscious mind – the higher self and the lower self – Freud’s id and super ego, which is essentially our animal instincts, or if you like, base consciousness and our higher authority. The Truth.

How I come to reach this conclusion is because our unconsciousness is the unknown aspect of our nature that creates our reality. It is consciousness which makes us act. We need balance in our lives to consistently act appropriately.

Aristotle: “We are what we repeatedly do. Excellence then, is not an act, but a habit.”

The Christian idea that the Ichthys is the ‘union of heaven and earth’ dates back to ancient wisdom which used the idea of Father Sky and Mother Earth to explain balance and creation.

Heaven (Father Sky – male proton) and Earth (Mother Earth – female electron) are also religious euphemisms for mind (male) and body (female). The central shape of the Vesica Piscis, known as the ‘bladder of the fish’ is, therefore, the soul. The soul is pure consciousness.

Jesus essentially represents pure consciousness because he was the perfect man. He mastered his mind and had control of his thoughts, actions and emotions.

As I mentioned above, thoughts, actions and emotions are characterised in ancient symbolism with the triangle of manifestation. The triangle represents the number three which is the number of creation.

Jesus is, therefore, a symbol of creation. I explain this in the article, Jesus as the Third Eye Chakra. The third eye chakra is our mind’s eye which we can use to create reality.

But as you know, Jesus is also the immaculate conception of God. In my view, God is the androgynous chemical union of the male and female energy, the protons and electrons of an atom. The Father Sky-Mother Earth of ancient wisdom.

We see the same concept in Judaism. The flower of life is also devised by interlocking circles – seven of them. Seven is a feminine number representing emotion. Emotions are measured on a scale of love to fear. This will become more apparent later when we discuss the almond connection.

The flower of life is the basis of the tree of life. It has a deep symbolic meaning of spiritual development and the evolution of consciousness. Essentially it represents balance and creation. 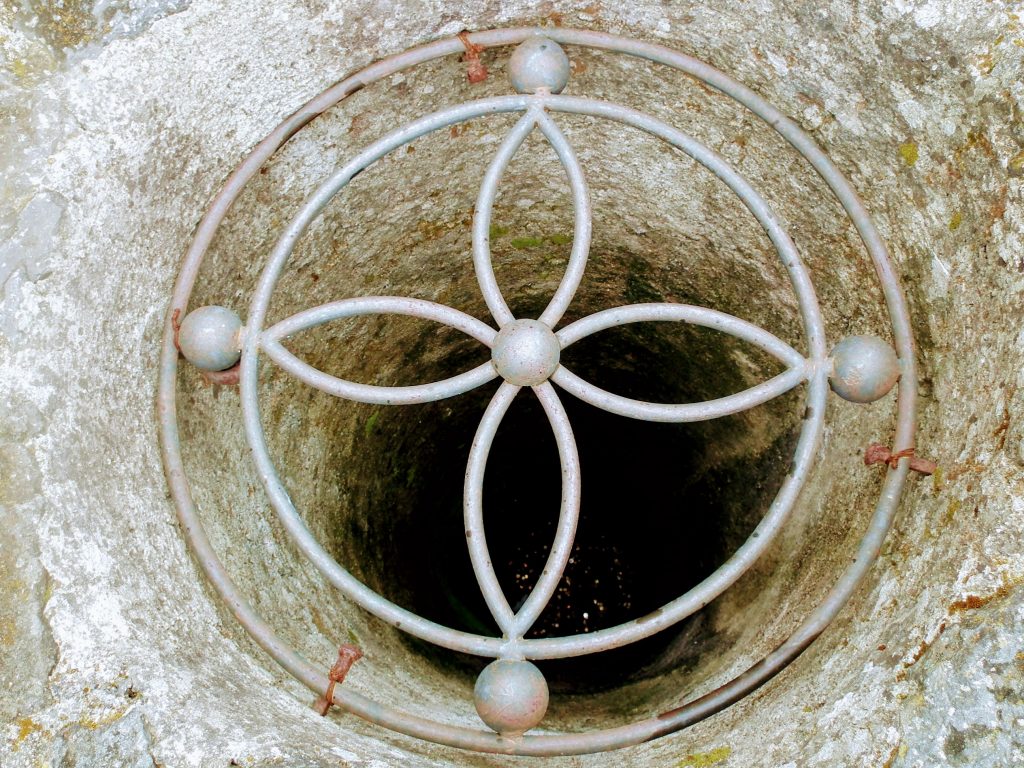 The four petals are the foundations of creation which develops from the three – the beginning of consciousness which ultimately evolves into reality. Just as atoms are the building blocks of creation. Note how the root of the flower of life are four Ichthys.

In the image above, you will also note that the root of the flower of life is positioned over a well. A well is used for storing water and in ancient symbolism – as it is in nature – water is used to symbolise that all life (creation) comes from water. This photo was taken at the Castello Aragonese on the island of Ischia, just off the coast of Naples, Italy.

The Catholic church still uses fish and water to represent creation. The bishop’s mitre is a prime example. Examine the image below and you can see that the fold in the mitre looks like the open mouth of a fish.

The bishop in this image also has a crescent moon behind him, a feminine symbol associated with water as the moon is known to change the tides. You may also note that the prongs look like the horns of the devil – which actually represents base consciousness. 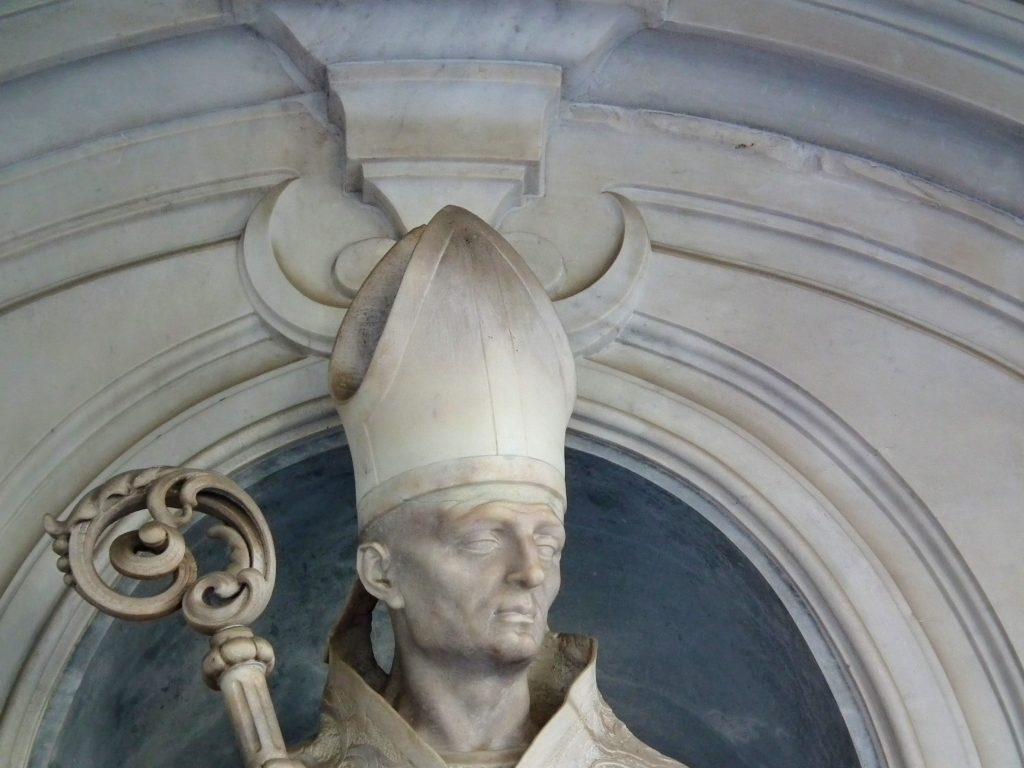 The oldest discovery of the Vesica Piscis dates back some 6000 years and was found in the Temple of Osiris in Abydos, Egypt. Osiris is a Sun God, the son of Nut and Geb, Father Sky and Mother Earth.

Osiris, therefore, represents creation – of male and female union. As a Sun God, he represents illumination or the higher self. His brother Set (sunset) is the God of storms and disorder, the base consciousness of our animal instincts.

This is Carl Jung’s theory of the self and shadow self. A 20th Century concept which the human race knew about 6000 years ago!

Before Isis, was the ancient goddess Ma’at, the Cosmic Mother who oversees the order of the world and restores chaos. She brings the Universe into balance. Sounds like an electron.

The vesica piscis was used to depict the vagina of the goddess Ma’at. The ancients used nature, including the dimension of human anatomy, as inspiration for their sacred symbolism. 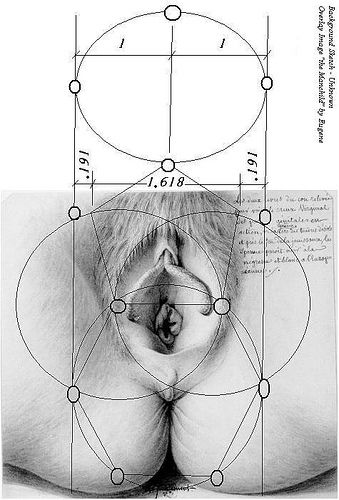 Ma’at was the Egyptian forerunner for Isis, the female counterpart of Osiris. The VP symbol was also used in to represents the vulva of Goddesses in Celtic and Norse cultures as well, as we see in the Goddess’ Garden at Glastonbury.

In Christian art, as we see in the introductory image of this article, we often find Jesus and other saints painted into a Vesica Piscis as though emerging from the womb of the Cosmic Mother.

But the symbol is mostly associated with Mary Magdalene, the ‘Cosmic Mother’ of the Christian Church. Thus again, we see Jesus as creation/pure consciousness.

So then, what do you make of the image below? This is the Washington Monument in the US capital. The obelisk represents the male phallus. And it is ensconced in the Vesica Piscis, the female vagina. 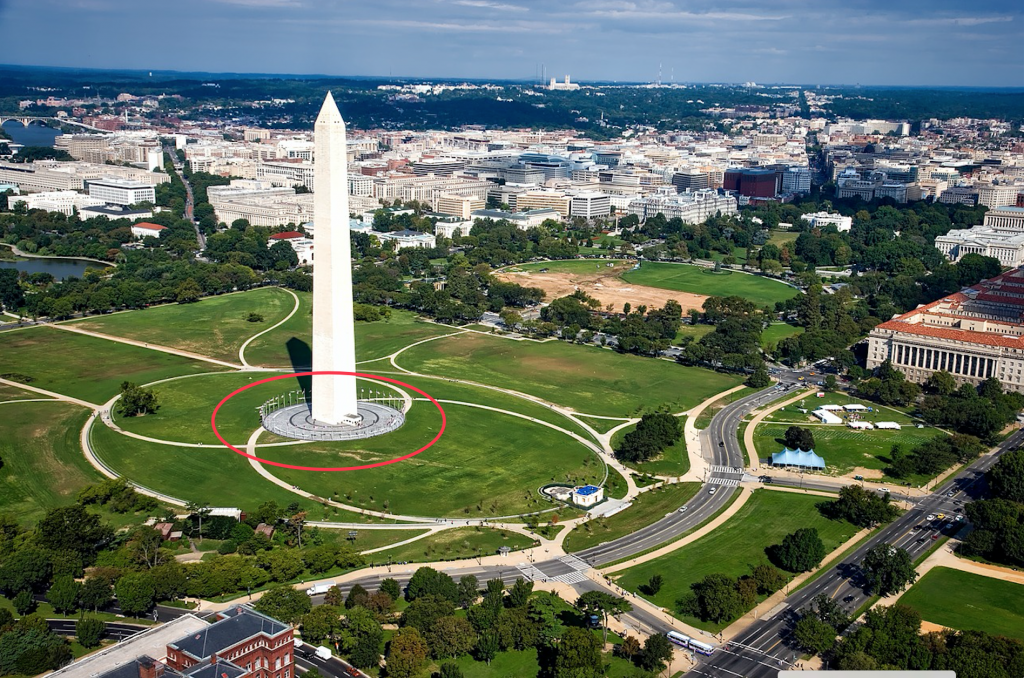 And thus we have an example of esoteric symbolism in modern times representing the union of the God and the Goddess, the protons and electrons of an atom, the male and female energies of nature. This balance is necessary for creation to flourish.

The Vesica Piscis in the Brain

The mandorla is found throughout the Celtic Tribes of Europe but is also used by the Igbo people of West Africa, which share so many similarities with Judaism, mainstream media has called them “the lost Jews.”

But more critically, the almond is the same shape as the amygdala, described by Science Daily as:

“an almond-shaped set of neurons located deep in the brain’s medial temporal lobe. [The amygdala is] shown to play a key role in the processing of emotions…”

The image below is an artefact from a Catholic church. It is the shape of an almond and the centre-piece of the Vesica Piscis – thus representing the amygdala, the seat of emotions. 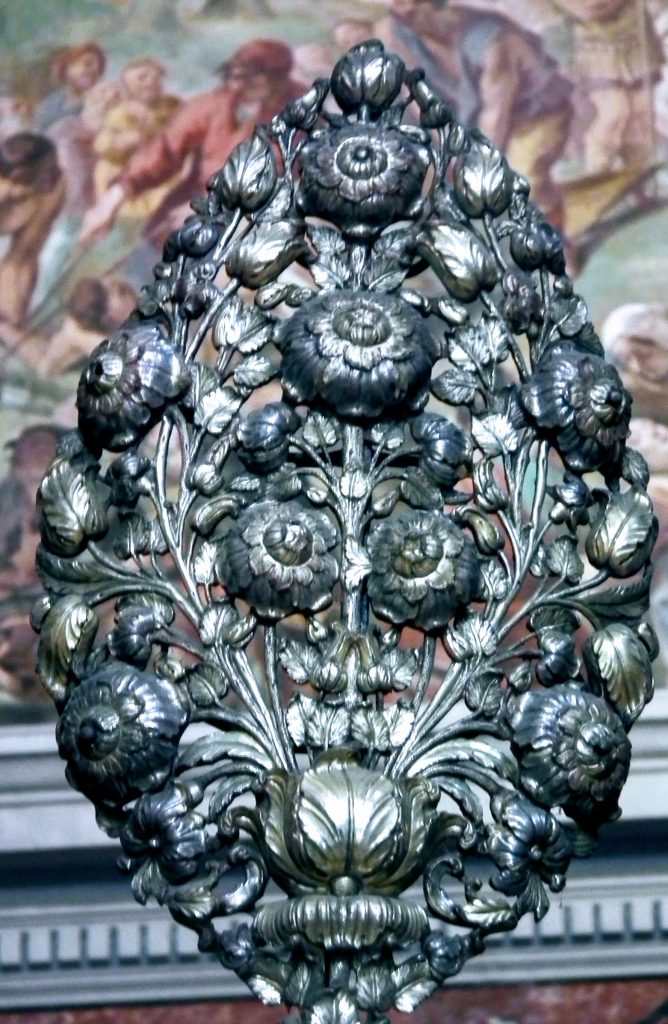 Emotions, impact thoughts, and thoughts impact actions. We are responsible for our behaviour, and as the law of attraction and law of karma determine, our thoughts, emotions and actions create our reality.

Furthermore, thoughts, actions and emotions are the basis of the triangle of manifestation. Just to remind you, the ‘magic’ number three is also regarded as the number of manifestation – or if you like, creation.

So just one more point.

In geometry, if you measure the distance where the two circles of the Vesica Piscis meet and the height at the widest point of the “bladder of the fish” you get a ratio of 265:153 which equals 1.7320261. This is as close as you can get to the square root of three.

Furthermore, in ancient Greece, during the time of mathematicians, Pythagoras and Archimedes, 153 was known as the ‘measure of the fish’. 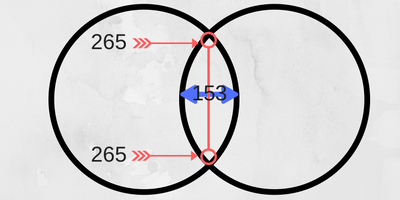 This expression comes from the Bible story in John 21:11 that tells the second miracle of Jesus. His fisherman disciples had not caught a catch all day, so Jesus tells them to throw the net over the right side of the boat:

“Simon Peter went up, and drew the net to land full of great fishes, a hundred and fifty and three: and for all there were so many, yet was not the net broken.”

Just to round this off, let’s look at the number of this verse – 21:11. In another form of ancient mathematics known as gematria, 21 equals 3 (2+1). Three is the number of creation. Eleven is a master number.

Master numbers are perfect creations. The eleven is one and one, which makes two – the perfect balance of male and female which by nature pro-create. The chemical union of two creates three.