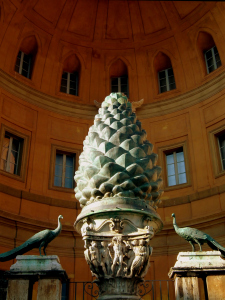 The Symbolic Meaning of the Peacock

Once you notice symbols around you, they appear everywhere. The same ones will keep re-appearing constantly. This is certainly what happened to me when I was researching the symbolic meaning of the peacock.

I first realised the peacock was an important esoteric symbol on a visit to the Vatican earlier this year. I had been quite eager to photograph the large pinecone statue and the world within a world sculpture in the Pinecone Courtyard.

The pinecone represents the pineal gland which is the third eye chakra, also known as the all-seeing eye, the evil eye, or the mind’s eye.

In terms of reaching higher consciousness and becoming “the creator”, the pinecone is pretty important.

The pinecone statue in the Vatican courtyard is flanked by two peacocks, one either side. We can, therefore, assume that the role of peacocks in alchemical symbolism also has a significant meaning.

And so it does!

The Peacock in Christianity

According to the Catholic Church, the symbolic meaning of the peacock represents immortality and resurrection. The reason for this is because peacocks do not decay and when they die and when they shed their feathers, they are replaced by colours more brilliant than the last.

It comes as no surprise then that peacock feathers are used to decorate churches around Easter as they mirror the theme of the resurrection of Jesus Christ. They are also often found in art and other forms of iconography depicting death and rebirth.

In Muslim myth, the symbolic meaning of the peacock is said to guard the Gates of Paradise. Given the similarities between Islamic beliefs and Christianity, it is interesting to note the two birds standing guard beside the 3rd eye chakra pinecone – the gateway to God – in the Vatican.

However, in Islamic myth, the peacock is said to allow Iblis (Satan) to enter the Garden of Eden where he tempts Eve. The peacock is expelled from Paradise with them.

The Peacock in Ancient Myth

In ancient Greek, the peacock is associated with Argos, a monster with one hundred eyes that could see everything – the all-seeing eye. It is no coincidence that in medieval Europe (Italy and UK), the feather of the peacock became associated with bad luck and called the ‘evil eye’. In Asia, peacock feathers are a symbol of good luck.

The peacock was also associated with the all-seeing eye of the Egyptian sun gods, Amon-Ra and later Horus. In Egyptian myth, the Sun God’s are killed and restored to life, thus again we see the peacock associated with regeneration.

In Hindu myth, the peacock is associated with Goddess Saraswati, which in Sanskrit means “the essence of the self.” She is the consort of the creator God Brahma.

But the symbolic meaning of the peacock in Hindu traditions represents unpredictability and is associated with mood swings that can change like the weather. The reason why there are two either side of the pinecone in the Vatican is the duality of good luck and bad luck.

The Peacock in Alchemical Symbolism

Whereas organised religions hint at the peacock symbolising creation, whether good or bad, alchemical writers get straight to the point.

In his revered works titled Amphitheatrum sapientiae, the hermetic philosopher and alchemist, Heinrich Khunrath calls the peacock “the soul of the world, nature which causes all things to bring forth.”

The psychoanalyst Carl Jung, who took a keen interest in hermetic alchemy, associated the peacock with the self and wrote “the peacock annually renews his plumage, and therefore has a relation to all changes in nature.”

The symbolic meaning of the peacock then refers to the transformation of the physical body which is possible by changing the way you think. That two peacocks are stood either side of the pinecone-pineal gland represents the duality of consciousness and how positive/negative thoughts result in the creation of good or bad, wanted or unwanted.

Because of its beauty, the peacock is associated with pride, one of the seven deadly sins. However, like the symbolic meaning of the peacock, pride is a double-edged sword as you should take pride in what you do and who you are without craving for recognition and attention.

Peacocks eat poisonous snakes and are thus referred to as serpent slayers, the serpent, of course, represents the sub-conscious mind and sinful pride. Therefore, the peacock has a strong symbolic edge that shows when you defeat your demons you expand conscious awareness and transform energy in a different way.

When you learn how to do this, you can move forward to attain a higher state of consciousness.

Do you want to know how ancient symbolism can help you create more of the things you want in your life?

Master Mind Content is a leading authority in decoding ancient symbolism . Our research unveils the secrets to understanding and taking control of the the subconscious mind, channeling energy to self-heal and effectively using universal laws to fulfil your potential.
« The Symbolic Meaning of the Vesica Piscis
Esoteric Symbolism Explained: Church of Dionysios, Zakynthos »

The Symbolic Meaning of the Olive Tree Read More
What Do Bells Represent In Esoteric Symbolism?  Read More
Why Three Is The Magic Number? Read More
1 2 3 … 11 Next »
Copyright © 2022 Master Mind Content. All Rights Reserved.
Search Our Site
We use cookies on our website to give you the most relevant experience by remembering your preferences and repeat visits. By clicking “Accept”, you consent to the use of ALL the cookies.
.
COOKIE SETTINGSACCEPT
Manage consent