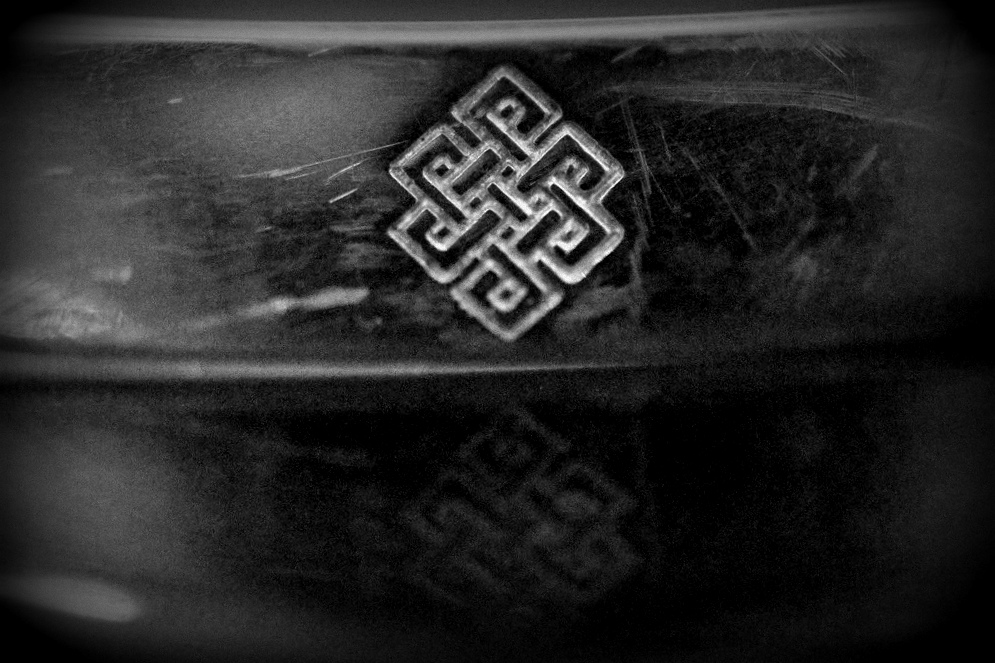 The Symbolic Meaning of the Endless Knot in Buddhism

The Endless Knot is perhaps the most complex of Buddhist symbols to understand. The orthodox meaning is typically shallow, and the true meaning is complicated. However, I will do my best to explain in terms that can be easily understood.

The symbol of the Endless Knot in Buddhism has several names; the eternal knot, the auspicious drawing, the lucky diagram, the Tibetan knot, and the Knot of Eternity.

A lesser-known name for this symbol is the Mystic Dragon – but this offers the most clues to its esotericism. More about them later!

The official line is that because the Endless Knot has no beginning or end and symbolizes the endless wisdom and compassion of the Buddha. It is said to represent our spiritual path, the continuum of time and the omnipresence of the Buddha self.

Another interpretation relates to nature and consciousness. The interconnected threads indicate that all consciousness in the Universe is connected – that we are all one. It’s a typical Buddhist view. But we are all connected to the electromagnetic resonance field that there is significant correspondence with modern science.

To be honest, I can’t argue with any of these explanations offered by orthodox channels, but as with all the other auspicious symbols of Buddhism, the explanations only offer a slither of the truth.

And rather than the unity of the Universe, the endless knot reflects the inner duality of human consciousness – the twin serpents representing the duality of our mind.

Serpent Nagas, Id and the Superego

The clue to the deeper understanding of the eternal knot is in its alternative name, the mystic dragon. This name derives from the ancient origins of the symbol when it was stylized by two intertwining snakes, known in Sanskrit as Naga.

In Hindu mythology, Nagas are benevolent and malevolent, demons and Gods. They represent our unconscious mind which falls into two parts, base consciousness and our higher self.

This is the classic battle between Gods and demons we find in all religious cultures and myths.

Just as the two serpents intertwined in ancient symbolism, so do the opposing ends of our conscious minds. The challenge we face is overcoming the subconscious mind and taking control of our thoughts and actions.

The famous 20th Century psycho-analyst Sigmund Freud goes some way to explain how the dual consciousness of the mind works, although modern psycho-therapy has picked flaws in Freud’s explanation of the id and superego.

In Freud’s model of the mind, the id is classified as the subconscious mind – the little brat that makes demands. The id is the animal instinct in us that craves food and has physical urges. It is the egos job to marshall the demands of the subconscious.

The ego is our habitual mind which so often switches into auto-pilot to appease the whims of the lower subconscious id, simply because this is what we are used to doing. We cannot resist the opportunity of a lazy life and the craving for emotional comforts.

It can often be the case that during these moments our conscience gives us a little nudge. This is the Super-ego, referred to today as the “higher power of the mind.” This is our higher consciousness.

The Super-ego is the voice that tells us the right thing to do, despite the urges generating by the subconscious mind. It is akin to a judge, parent or school teacher who criticises, scolds and disciplines the ego for giving into the id. This is where feelings of guilt and shame stem from.

The subconscious is where your survival instincts reside; your basic instincts for food and shelter and your animal urges for sexual gratification. This is why we find half man-half beast creatures in mythology throughout different cultures throughout the world.

In Hindu mythology, the serpent naga is semi-divine beings, half cobra, half-human. The nymph God pan in Greek mythology was also depicted as half-man, half-beast. This represents our animal nature.

Serpents are also depicted as sea creatures and pictured in iconography rising above the heads of Gods and Buddhas referring to the nagas that protect the infant Krishna from the rain.

This double distinction reflects the duality of our consciousness, the subconscious id which protects our emotions by producing animal urges and the Supreme higher conscious which tries to guide us along the right path. The subconscious mind only wants us to survive and thrive.

The Bhagavad Gita describes our dualities as the Purusha (pure consciousness) and Prakriti (primal nature.) Krishna remarks, “even the best man on this earth has something of the worst in him.”

How is the Endless Knot the Duality of Our Consciousness?

The modern-day iconography of the endless knot does not reveal the image of serpents, although the meanings offered by mainstream Buddhism can be connected to the esoteric principles we find in the serpent. The endless knot is also linked with the kundalini serpent – the intertwining energies of Ida and Pingala.

The knot is said to symbolise the union of compassion and the infinite wisdom of the Buddha, the omniscient, omnipresent consciousness that exists in each of us. This is absolute consciousness in Hinduism and what monotheistic religion call ‘God.’

The eternal knot has no beginning and no end, representing the ceaseless movement of time and the endless cycle of Samsara – the cycle of death and rebirth.

Serpents also represent rebirth and renewal in ancient symbolism due to the systematic shedding of their skin. It is typical to find serpents in ancient cultures symbolising cycles of time.

Serpents also represent our subconscious and higher conscious minds, both of which are omniscient and eternal. You can read more about the esoteric meaning of the serpent here.

The eternal knot then also represents the reincarnation of our souls and the consistent death and rebirth of values we learn through life having acquired wisdom and compassion. The Celtic knot found in Britain and Ireland has the same meaning.

Essentially, as our souls pass through the endless knot of time, it learns more of the Truth. And that is the challenge we face in our quest for enlightenment.

When you attain enlightenment and become Buddha, your higher consciousness has mastery over the subconsciousness. Furthermore, Buddhists tell us the perfect being understands their complete union with everything.

Mainstream Buddhism explains what the endless knot represents, but does not explain how the concepts work on a physical and practical level.

With this type of knowledge confined to the realms of mysticism and dogma, people either don’t believe it, or they don’t understand it in a way they can apply it to their daily lives. And that is how organised religion works. It’s an endless knot.

Master Mind Content is a leading authority in decoding ancient symbolism . Our research unveils the secrets to understanding and taking control of the the subconscious mind, channeling energy to self-heal and effectively using universal laws to fulfil your potential.
« The Symbolic Meaning of the Dharma Wheel in Buddhism
The Symbolic Meaning of the Treasure Vase in Buddhism »