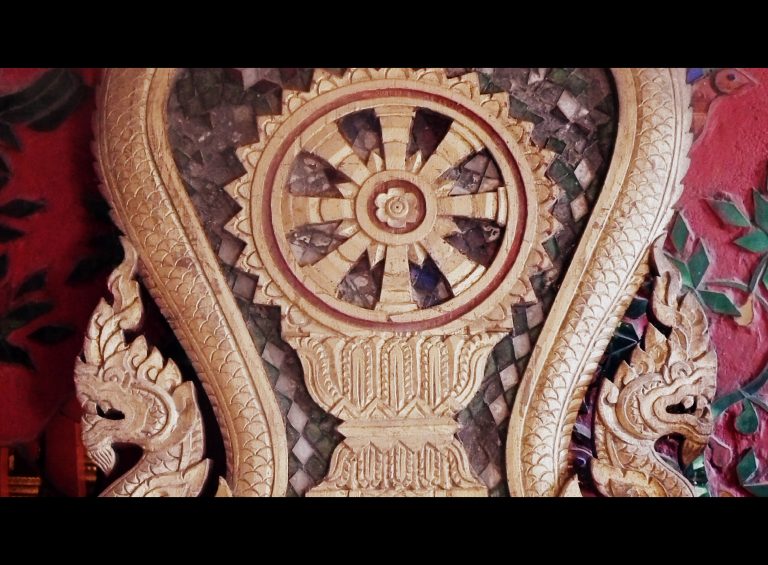 The Symbolic Meaning of the Dharma Wheel in Buddhism

The symbolic meaning of the dharma wheel is a core teaching of Buddhism. Together with the lotus flower, it is the most commonly used symbol and found in every Buddhist temple, shrine and monument.

Each detail of the dharma wheel has a symbolic meaning. The central hub is the axis of the world on which the cycles of life rotate. The outer rim signifies our limitations and the spokes reflect the teachings of the Noble Eightfold Path.

The official view of the dharma wheel relates to the Buddha’s three teachings, the first of which was the sermon Gautama Buddha is said to have given to his five friends at the Deer Park in Sarnath, northern India.

According to historical records, the two proceeding sermons were given some 500 years later. It is believed the sermons were written by the original Buddha and withheld for centuries until mankind was ready to hear them.

For me, the official viewpoint given in the ‘Three Turnings of the Wheel’ scenario adds little weight or value to the spiritual growth of any individual. The dharma wheel is too important in Buddhist philosophy for this to ring true.

After much research, I am struggling to find a realistic and reliable explanation of what the dharma wheel means from Buddhist sources. The only reasonable clue is that “Buddha is known as the Wheel-Turner.”

An Alternative Definition of the Symbolic Meaning of the Dharma Wheel

The wheel is made from the parts, which is orthodox Buddhism is a reflection of the three jewels of Buddhism; the Buddha, Dharma and Sangha.

Indian Yogis tell us there is a Buddha in each of us. We are born Buddhas’, but lose sight of this knowledge. It is our challenge in life to rediscover our true self whereby we become Buddha.

Another word for Buddha is a higher state of conscious awareness whereby we have all the understanding and love we need. This is who we are!

Buddhist dharma teaches the moral and ethical practices man should follow in order to serve mankind and himself. With right thought, right action, right speech etc, we perform duties to others. These are the principles in the Noble Eightfold Path.

So if we are Buddhas and the Buddha is the “wheel-turner”, the symbol of the dharma wheel must relate to how we set the cycle of life in motion that will subsequently become our destiny.

There is an element of karmic thought in this conclusion, but the symbol of the dharma wheel has a far deeper meaning that can be used to improve your life and the lives of those around you.

The Spiritual Meaning of the Dharma Wheel

The esoteric meaning, however, is the dharma wheel represents the Self and the deer are the two other parts of your mind; personal conscious (subconscious) and the Unconscious.

Mainstream Buddhism says the deer represent the Deer Park in which Gautama Buddha gave his first speech. They are also said to symbolise peace and love. The latter is a least closer to the truth!

The deer are male and female, thus representing the duality of opposites. In alchemical symbolism, male is associated with the mind and the female with emotions.

Thus you could argue that to become Buddha, you must cultivate qualities that give you peace of mind and the ability to love all things unconditionally. Buddhism after all claims we are all connected.

Male and female qualities are often reflected in symbolism as the sun and moon, the Sun which gives life-giving energy to mankind and nature, and the Moon which provides balance and motion.

But the symbols also reflect the duality of two worlds, the microcosm and the macrocosm. How we feel and think on the inside is ultimately reflected on the outside…

…Thoughts and emotions are energies that manifest in our lives on the physical plane.

The Eight Spokes of the Dharma Wheel

In numerological symbolism, eight represents higher-consciousness, the continued practice of conscious awareness as instructed by Gautama Buddha’s Noble Eightfold Path and the willingness to teach others.

The eightfold path is how the Buddha said we need to experience life in order to get the most from it. Essentially, by leading a balanced and simple life, you will sign in tune with the natural laws of the Universe.

The esoteric interpretation of the eight vibration, however, is consciousness beyond the laws of nature. This is a level of conscious awareness that takes you into the higher realms of the astral plane.

This is the plane on which Buddha resides. Buddha is your true nature, your higher-self, the knower and seer of everything.

When you reach this point of conscious awareness, you have mastered thoughts and emotions, you have come to the understanding that mind has power over matter and you no longer have any attachments to the material plane.

In other words: Your mind is liberated. You are free. You have no fear.

In ancient Egypt and Greece, Thoth and Hermes respectively were associated with the number eight. Both were the Gods of wisdom, “messengers” of the Gods to men and the bringers of light – illumination, information, knowledge.

From this realm, you have access to the eternal mass of Universal knowledge, described as the Akashic Records, the collective unconscious, the Book of Life, the Tao and the morphogenetic field among others.

Call it what you like, but it is said that every idea, thought and scrap of knowledge is recorded in the Cosmos. And we all have access to the Cosmic Library!

The problem for most of us is, we do not know how to access this information. Worse still, we do not realise when we receive messages (Thoth/Hermes) from this higher realm – from Buddha.

This explanation may sound crazy to a lot of readers, but keep an open mind and experience it for yourself. Then you will begin to understand and work with it!

For now, let me put it this way – have you ever had a Eureka moment or information you had been looking for turned up unexpectedly? It came from your higher-self.

Imagine if we could all reach our higher-self and have access to all the information we need. Imagine how peaceful and happy the world would be.

But if we could do this, the corrupt leaders that infiltrate religions like Buddhism would not be able to control us.

And that is why the orthodox view of the dharma wheel focuses on morals and ethics of the physical plane and not the secrets of the Universe.

Master Mind Content is a leading authority in decoding ancient symbolism . Our research unveils the secrets to understanding and taking control of the the subconscious mind, channeling energy to self-heal and effectively using universal laws to fulfil your potential.
« The Symbolic Meaning of Stupas
The Symbolic Meaning of the Endless Knot in Buddhism »