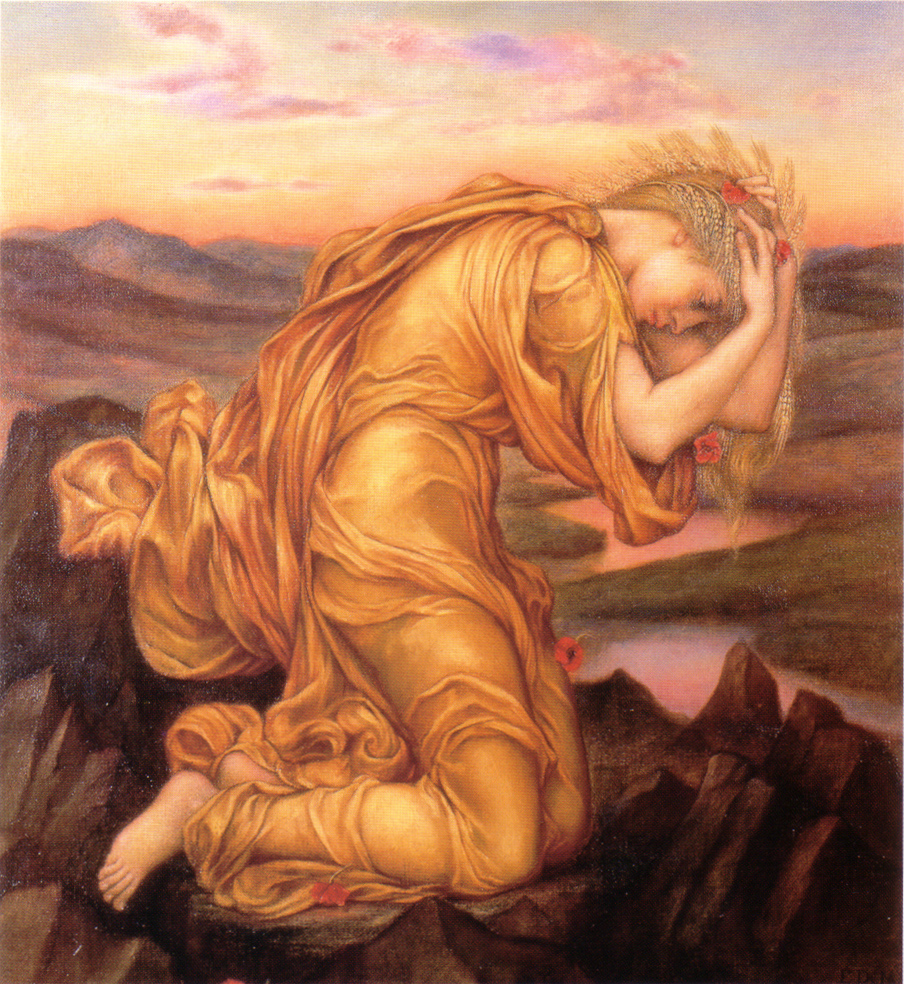 The Symbolic Meaning of Demeter in Greek Mythology

To the ancient Greeks, Demeter was associated with agriculture, a symbol of nurturing, regeneration and fertility. She was subsequently given the title of 'goddess of the grain'. The symbolic meaning of Demeter aligns with the planting and cultivation of seeds needed to nourish the body, mind and ‘soul’.

Seeds and grains are symbols that relate to thoughts. The thoughts you think nourish your subconscious mind, your emotional wellbeing and the physical behaviours, beliefs and attitudes you adopt.

As archetypal energy, Demeter is the mythical personification of the caregiver archetype. The caregiver is fundamental to your personal well-being and the well-being of others. Its role is to look after you on a physical level (body), psychological level (mind) and emotional level (‘soul' - the personal unconscious).

As the goddess of agriculture, Demeter is associated with death and rebirth; regeneration or rejuvenation.

Rejuvenate your body, mind and soul. Where have you heard that before?

Ah yes, the mantra of brands that provide spiritual and wellbeing therapies.

The Esoteric Meaning of Demeter

On a deeper level, Demeter is recognised as a nourishing and nurturing earth mother; the provider and regenerative energy that enables life to flourish. This requires giving yourself and others emotional wellbeing, self-respect and self-care to develop.

Demeter is, therefore, the archetype that aligns with the caregiver archetype, an aspect of Mother Earth (Rhea, Demeter's mother). The caregiver is responsible for planting the seeds of desire, aspirations and goals through the nurturing of behaviours, beliefs and attitudes.

One of the key lessons we learn from the Demeter archetype is self-worth. Self-worth is developed through self-respect and self-care. When you adopt these qualities, you give and receive care and respect from others.

As a symbol of fertility, the goddess of the grain and agriculture is responsible for planting seeds of thought that foster positive actions and nurturing new ways of being so you can bring new experiences into fruition - the blooming of flowers and the ripening of fruit and vegetables

In psychological terms, seeds are the thoughts, beliefs and attitudes you plant and nurture in your subconscious mind.

On a physical level, a mature caregiver has the patience to allow things to grow; relationships, projects, intentions, goals, aspirations and desires. “Good things come to those that wait” (in the right circumstances).

This archetype is also the energy that brings about a rich quality of life because you feel emotionally fulfilled. This is evident in the myths of Demeter and Ceres (the Roman goddess of agriculture).

The Symbolic Meaning of Demeter in Myth

Demeter mothers three children. Zeus was the father of Iacchos and Kore (Persephone). She also had a son called Ploutos - the god of earthly wealth. Ploutos was the offspring of an affair with the Titan, Iasion, with whom she fell in love at the wedding of Cadmus and Harmonia. Depending on which account you read, one seduced the other and they made love in a “thrice ploughed field”.

The most revealing accounts of Demeter are the myths relating to the abduction of her daughter, Persephone. When the Kore, literally meaning ‘maiden’ is kidnapped by Hades and taken to the underworld to be his bride, Demeter is thrown into a state of despair, grief and depression.

Demeter voices her displeasure and desperation to Zeus, Persephone’s father, but the king of the gods does nothing to order the return of their daughter. To show her displeasure, Demeter leaves Olympus. When she orders the people of Eleusis to build her a temple, she sits in silence brooding and prevents crops from growing. The fields become infertile and famine spreads across the Earth.

In esoteric symbolism, the Earth relates to the body and the subconscious mind. Famines in myth represent a lack of emotional and psychological nourishment. Hence we find Demeter so grief-stricken she is not prepared to perform her caregiving role as the goddess of agriculture.

Scholars acknowledge that as the goddess of the grain, Demeter is associated with the fertility of the land (earth). She guarantees growth.

Conversely, when Demeter is not honoured, the earth becomes infertile. In other words, when your emotional wellbeing is neglected, you become depressed - a central theme that shows up throughout Homer's Hymn To Demeter.

The thoughts you think is the information you program in your subconscious, and the subconscious creates your experience of reality through emotions and actions.

Thoughts, actions and emotions are energy.

Therefore, if your thoughts, actions and emotions are not in your best interests or the interests of others, you are not developing your emotional wellbeing or self-worth.

In Homer’s Hymn To Demeter, Zeus is forced to intervene and orders Hades to return Persephone to her mother.

An agreement is reached that Persephone will spend six months of the year with Demeter and six months in the Underworld with Hades. Here we see symbols of balance (six), the integration of unconscious content (the underworld) into the subconscious (earth).

As scholars point out, (although not for the right reasons), the motif of “death and rebirth” is a central feature of the Demeter myths. Death and rebirth is symbolic for the transformation of energy and the development of the personality.

The death of old ways of life makes room for new ways of living to be born. This is true of beliefs, attitudes, personality traits and life experiences. This was reflected in the Eleusian Mysteries with the concept of maiden, womanhood and crone; or the train of Persephone, Demeter and Hades.

These were the secrets that initiates of the Eleusian Mysteries kept a closely guarded secret. Otherwise, it was the secrets of "agricultural fertility and the possibility of abundance" - as believed by mainstream commentators.

The symbolic meaning of Demeter teaches you about self-worth which is nurtured through self-care and self-respect. These are the attributes of the caregiver archetype which you can read more about here.

If you would like to know more about the symbolic meaning of Demeter of other Greek gods, sign up to our Essential Self-Development Program and access in-depth material from our VIP Members Area.

Master Mind Content is a leading authority in decoding ancient symbolism . Our research unveils the secrets to understanding and taking control of the the subconscious mind, channeling energy to self-heal and effectively using universal laws to fulfil your potential.
« Overview of the Caregiver Archetype
Apollo in Greek Mythology »

Tantalus in Greek Mythology Read More
Artemis and Apollo Slay The Children Of Niobe Read More
Apollo in Greek Mythology Read More
1 2 3 … 8 Next »
Copyright © 2022 Master Mind Content. All Rights Reserved.
Search Our Site
We use cookies on our website to give you the most relevant experience by remembering your preferences and repeat visits. By clicking “Accept”, you consent to the use of ALL the cookies.
.
COOKIE SETTINGSACCEPT
Manage consent