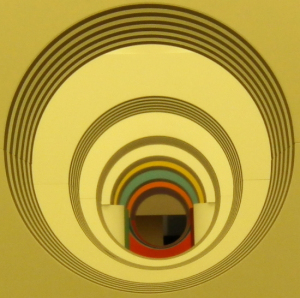 The Esoteric Meaning of the Circle

The circle is the oldest symbol known to man. With a single point in the centre of a circle, it is believed the shape was originally used to represent the sun, but could just as easily be the first symbol to reflect consciousness.

Circles have also been found carved into prehistoric caves with a cross in it. The cross inside a circle represents the physical aspects of earth, the four directions, four elements and four winds.

This idea later became the square which in hermetic symbolism represents the connection man has to the physical plane and the astral plane.

We see this most succinctly in Leonardo da Vinci’s Vitruvian Man.

The circle has been used in all cultures across the world throughout history to represent completeness because it has no beginning, no end and no direction.

It is no mere coincidence that the circumference of a circle is measured by pi (π), an irrational mathematical equation that does not have a defining decimal point. Pi, like consciousness, will always expand outwards.

The circle is arguably the most commonly used geometric shape in religion and alchemical traditions because of its association with consciousness.

It is also very easily adapted with other patterns to give it different meanings. The Native American Indians used basic methods to achieve this, but with profound effects.

The wisdom of ancient mystics developed the Seed of Life using seven overlapping circles. The seed then multiplies to become the Fruit of Life using concentric circles. Both result in impressive images that are rich in symbolism and meaning. It describes the origins of life on Earth = consciousness.

We also found the esoteric meaning of the circle reflected in the multi-layered meaning of the Ouroboros, the tail-eating snake or dragon found in Egypt and parts of Asia. Just as we find in the circle, the Ouroboros reflects the never-ending cycle of mankind, but with the added value of the serpent which sheds its skin in order to grow and remove parasites.

And so too, the evolutionary cycle of mankind seeking spiritual growth and understanding must shed old beliefs and character flaws that no longer serve us. And in doing so, we move towards higher states of conscious awareness.

A heightened state of conscious awareness is what the human race and the planet need right now.

Do you want to know how ancient symbolism can help you?

Master Mind Content is a leading authority in decoding ancient symbolism . Our research unveils the secrets to understanding and taking control of the the subconscious mind, channeling energy to self-heal and effectively using universal laws to fulfil your potential.
« Esoteric Meaning of the Hexagon
Symbolic Meaning of the Star of David »