Lions appear in the symbolism of multiple cultures. From the jungles of Africa, these enigmatic beasts adorn the doorways of temples, civic buildings and fountains in Europe, Asia and the Americas.

The male lion was considered as a solar symbol by ancient cultures. Known as the “King of the Jungle” its shaggy mane resembles diagrammatic rays of the sun.

In esoteric symbolism, kings and the sun have the same meaning; authority and the provider of life.

The esoteric meaning of lions, therefore, relates to individuals that have control over their body and mind. 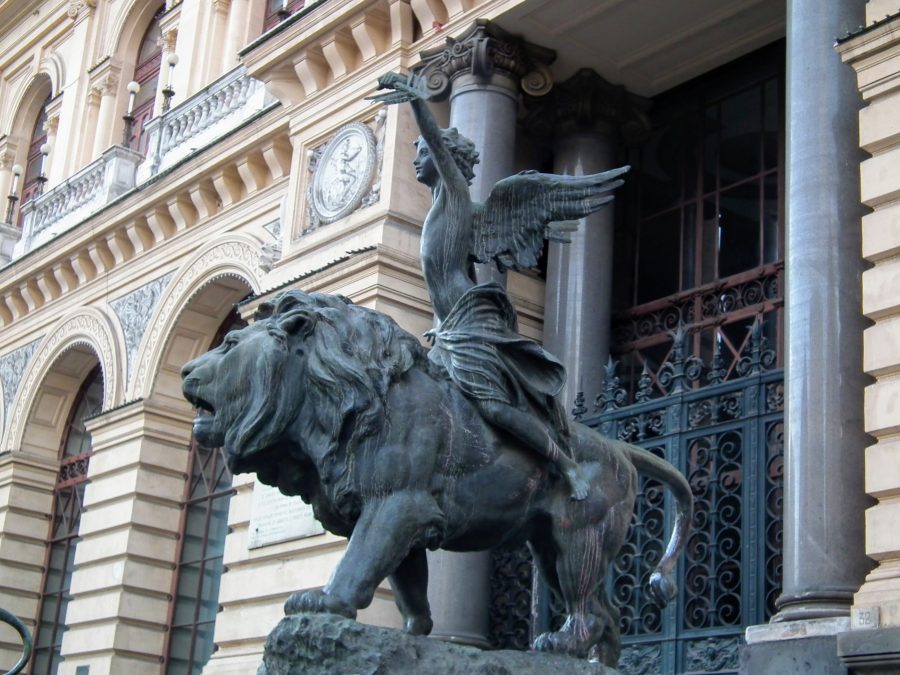 In addition, male lions protect the pride. They have authority over their female counterparts. Lionesses in esoteric symbolism are recognised as a lunar symbol.

The reason for this perhaps is because lions do most of their hunting at night and it is the role of the female to enact the kill and provide for the provide.

Lunar symbols, and the darkness of night, relate to emotions and the subconscious mind. Knowing this, it is possible to deduce that the esoteric meaning of male lions relates to individuals that have control over their subconscious mind which then provides them with nourishment.

In nature, lions are courageous beasts that will fight to the death to protect their pride. Although these creatures are considered ferocious, they are also playful and prefer to live a simple and peaceful life.

In the image below, you can see a lioness carved into a stone water fountain. Water is also a symbol for emotions. The lioness is laid down, suggesting she is in a relaxed and subdued state. The god-like figure in the background is pointing towards the statue as if to say, subdue your emotions and your mind will also be relaxed.

Essentially, this is the lesson for you to learn from the esoteric meaning of the lion. 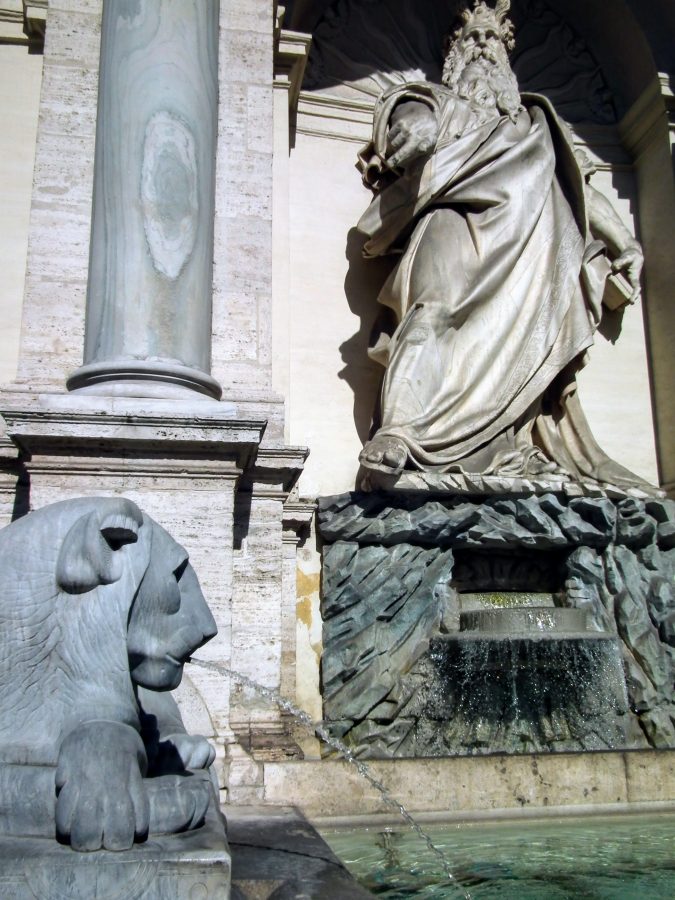 The lion’s connection with the sun has a deeper symbolic meaning. The mane may have a slight resemblance to the sun, but the actual connection is in relation to strength and power.

In Chinese traditions, the sun was recognised as the Great Male Principle. As the source of life, the sun is associated with en-light-enment and illumination.

To the alchemists, Sol Invictus – the Unconquered Sun – is a symbol for individuals that have the strength of mind to overcome challenges. Sol was hailed as “the rising sun who dispels the forces of evil.”

In shamanic traditions, the lion represents creativity, intuition and imagination, all of which are required for self-fulfilment.

It is often the case that we are not aware of the innate powers within us and at times we lack assertiveness and courage when in pursuit of goals. This is because of unnatural fears ingrained in the subconscious.

An extension of the sun is fire. Ancient sages assigned the four elements with meaning. Fire was given to passion and personal power. Imagining fire in the mind’s eye can also be used to dissolve old values that create problems in your life and replace them with higher values which will improve your quality of life.

Whenever you face personal struggles, the lion is a reminder to summon strength in order to achieve our goals.

When you see the synchronicity of lions or solar symbols, this is the message your unconscious is trying to tell you.

Courage and willpower are one of the first things you need in pursuit of success. This is why you find lion statues positioned in temple doorways.

You will often find lions at the entrance of palaces. This reflects the King’s power and courage.

“In medieval symbolism, the “philosopher’s stone” (a pre-eminent symbol of man’s wholeness) is re- presented as a pair of lions or as a human couple riding on lions. Symbolically, this points to the fact that often the urge toward individuation appears in a veiled form, hidden in the overwhelming passion one may feel for another person. (In fact, passion that goes beyond the natural measure of love ultimately aims at the mystery of becoming whole, and this is why one feels, when one has fallen passionately in love, that becoming one with the other person is the only worthwhile goal of one’s life.)” ~ Carl Jung, Symbols of Transformation

The kings of Europe and Assyria were keen to remind their subjects of their lion-like courage and often used the beast on their coat of arms. The Assyrian king, Adad Nirari II declared “I am all-powerful…I am lion-brave.”

The Esoteric Meaning of Lions in Ancient Cultures

Lions have featured in esoteric symbolism for thousands of years. The Sumerians were the first to assign the animal to the astrological house of Leo.

In astrology, the house of Leo is said to represent a balance between emotion and intellect.

This beautiful mosaic of the ‘Passing Lion’ recovered from ancient Babylon also reflects the movement of the sun across the sky.

It comes as no surprise that the esoteric meaning of the lion is connected with various sun gods. In ancient Egypt, the rising sun was associated with Amun-Re.

In the Mithraic tradition of Persia, we find bas reliefs portraying a lion in a threatening stance. Persian mythology, recounts the story of the sun-god Mithra slaying a bull. In the wild, lions prey on bulls.

Some researchers claim the Persian sun-god, Mithra, was the pagan Christ.

In the Bible’s book of Revelation, John describes Jesus as the “lion of Judah,” the only living beings capable of breaking the seven seals of the scroll. Christ also has 12 disciples, each of which represents a sign of the zodiac (around the sun) and traits of personality.

Here again, we see the lion is a symbol of overcoming animal nature. Jesus, and other enlightened men before him, had the light (of this sun) within and were prepared to share knowledge with others.

In Buddhism and Hindu, the lion is typically pictured with a Bodhisattva, a wise man that withholds enlightenment in order to teach others transcendental wisdom and help guide them towards nirvana.

Essentially, the lion in Hinduism has the same meaning as fire, which can burn away the delusions of the habitual mind. We find a similar comparison in both the Old Testament and ancient Sanskrit writing.

Psalms 7:1-2 | “Deliver me from all who chase me! Rescue me Otherwise they will rip me to shreds like a lion; they will tear me to bits and no one will be able to rescue me.”

In Hindu mythology, the Hindu god Narasimha, an avatar of Lord Vishnu, destroys demons by ripping out their hearts. 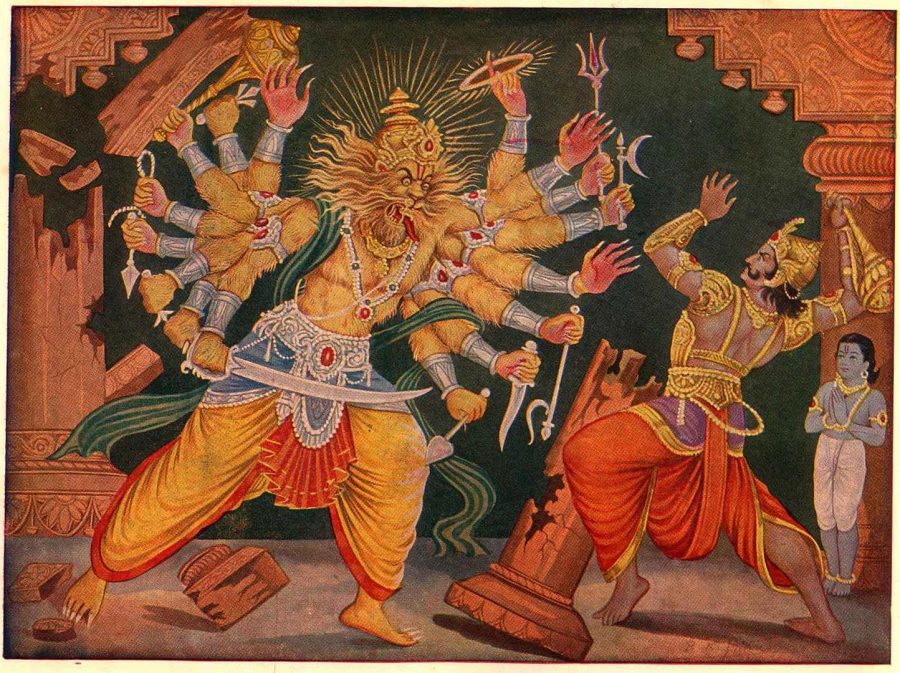 But as with all symbols, there is a negative aspect, thus the lion represents two opposing aspects of man’s nature; ferociousness and affection.

The lion is seen to dominate other animals and is a skilful predator. In The New Testament, Satan is referred to as a lion, ruthless, stealthy and aggressive.

Peter 5:8 | “Be alert and of sober mind. Your enemy, the devil prowls around like a roaring lion looking for someone to devour.”

Whilst hunting, the male lion roars at its prey to scare it off and steer it towards the female lions. When we are not of a sober mind, we become easy prey for people that intend to dominate and manipulate others.

The lion, therefore, is not only symbolic of illumination. Its true meaning is the Self – the mediator between the ego and superego. The Self only becomes whole during the process of individuation.

The sun also represents the Self. Thus the curious wood carving of the green lion devouring the sun is an enigma that appears to have alchemical commentators baffled. 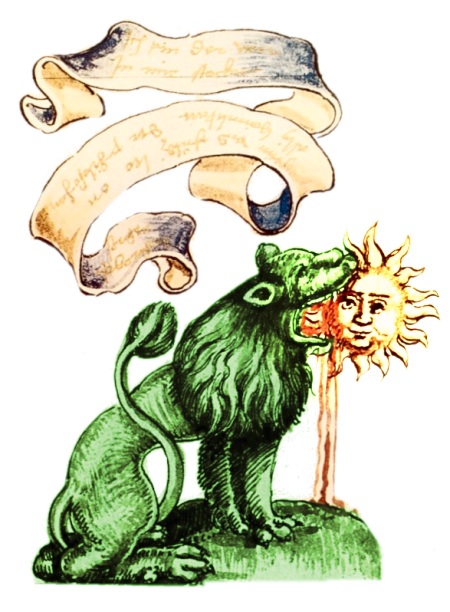 This is my opinion.

The green lion has been associated with the metal mercury which aligns with the Roman god of the same name. Mercury is the god of healing and the only god of the Roman pantheon that traverses all three worlds.

Mercury represents the vital energy, which first appears as a thought and later becomes manifest as physical reality. The reason for his is explained clearly in the Numbers Symbolism Course.

In brief, Mercury is also associated with wisdom, thus the green lion represents higher knowledge that emerges in the mind as a superior idea. The initial stirring of Truth may not be entirely developed, but the seed has been planted in which the conscious-ego has the potential to transform. Eventually, the True Self develops as a conscious thought.

“The lion is the “lower sun,” a theriomorphic representation of the masculine principle. There are alchemical pictures showing a lion devouring the sun. Since sun, king, and gold are equivalents, this would signify the descent of consciousness into the animal realm where it must endure the fiery energies of instinct. In chemical imagery, it is the purification or refining of gold.” ~ Edward Erdinger, Anatomy of the Psyche

Thus the green lion swallows the existing consciousness of the sun – The Self – to become the authority of the mind.