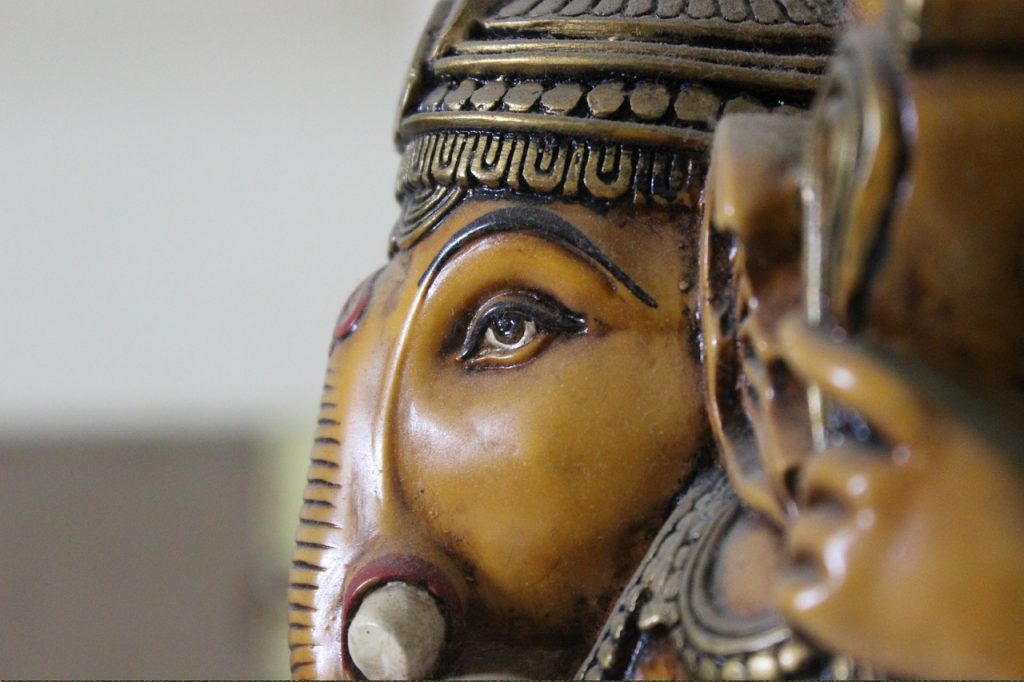 The Deeper Symbolic Meaning of Ganesh

Lord Ganesh is arguably the most recognisable of all the Hindu Gods. The distinguishable elephant head is a dead giveaway, even if you can’t always remember his name…

…how many times have you caught yourself saying, “Oh, that’s that Hindu God, what’s his chops…?”

Or is that just me!

Like all Hindu gods, Ganesh is rich in symbolism. Officially known as ‘the remover of obstacles’ and associated with good fortune, the elephant-headed deva is popular with practising Hindus.

So let’s start with the myth of how Ganesh came to exist. Knowing this will help to shed light on his deeper symbolic meaning.

Ganesh features in several Hindu myths, but the legend of his birth story is perhaps one of the weirdest stories in the world of mythology. And there are a lot of weird stories in ancient mythology.

For brevity’s sake, I will keep this recital short, but if you want to read a more detailed version of how Ganesh came into existence, this source is more reliable than most.

Ganesh was created from the soil by Goddess Parvati. His purpose was to mind her quarters whilst she bathed. The first guard was sacked for allowing her husband Shiva into her chambers despite her express wishes that nobody, even her husband, should be allowed entry.

Ganesh was true to his word. But this angered Shiva. The ‘Destroyer’ sliced off his head. When Parvati found out what had happened, she was livid and ordered her husband to repair the damage.

But the boy’s head was irreparable so Brahma advised Shiva to travel north and use the head of the first living creature he finds. Lord Shiva sends out his army and they return with an elephant’s head.

I told you it was weird.

However, the creation myth of Ganesh does make more sense once you understand the symbolic reference of the characters involved. So let’s dig into a bit of Hindu symbolism shall we?

Parvati – the creator of Ganesh – represents primordial energy, the first signs of consciousness. Ganesh is also associated with the Hindu AUM symbol which is the primordial sound of creation.

Shiva – the co-creator of the elephant-headed Ganesh – represents death and rebirth. Shiva is well known as the destroyer, but what this title really means is he has the ability to dissolve the values of the ego that do not serve us so that we can develop a better personality or improved world view.

In other words: some degree of enlightenment. Understanding. Wisdom.

When Shiva restores Ganesh to life by fitting him with the head of the elephant, he bestows his ‘son’ with the powers of a god. Ganesh is revered as one of the Supreme Gods in Hinduism.

The symbolic meaning of Ganesh, therefore, represents life cycles, a process which involves death and rebirth. This is why he is mostly known as the remover of obstacles. Hindus pray to him when they are faced with a task or are about to embark on a mission such as a journey, work project or school exam.

But what people tend to forget is that Ganesh is also the bringer of obstacles. He is symbolic of the tests we have to overcome before we can be successful in our mission. This is simply the nature of divine consciousness.

As beings of absolute consciousness, we are tested to learn the lessons we need to increase your conscious awareness that enables us to discover our true selves.

For further explanation of the evolution of consciousness, you might want to check out this decoding of the 12 Adityas that feature in the Rig Vedas.

In ancient symbolism, the elephant signifies, wisdom, patience and strength or faith. These are the three attributes we need to face the tests Ganesh (consciousness) places in front of us.

And just as Parvati put faith in her creation, we also have to have faith that our divine consciousness will help us succeed.

Okay, let’s take a look at other Ganesh symbolism.

The name of Lord Ganesh offers some clues as to what the God represents. Ga is an ancient Sanskrit word meaning ‘Buddha Intellect’ or the enlightened one, and Na means ‘wisdom.’

The Ganapati Upanishad associates Ganesh with the Universal soul – Brahman, which is the aspect of his creator, Parvati. In the same book, he is identified with the individual soul Atman.

Hindus believe our purpose on earth is to reunite the individual soul with the universal soul – to discover our true selves. The Bible tells us we are ‘made in the image of God,’ thus we are divine beings.

But we need wisdom, patience and faith before we can understand our true selves. Everything that Ganesh projects.

Ganesh is also described as having the perception to distinguish between truth and ignorance. This is the male aspect of his co-creator that we find in Lord Shiva. The role of the destroyer is to dissolve the ego and open the door to let in the light so you can see the Truth.

So the symbolic meaning of Ganesh is divine consciousness that gives us tests by placing obstacles and allowing us to progress in our mission by removing obstacles.

The aspect of consciousness is represented by the four arms Ganesh is depicted within Hindu iconography, each of which represents attributes we need to master in order to develop consciousness and reunite the Atman with the Brahman; control mind, dissolve ego, develop intellect and master discipline.

The serpent wrapped around Ganesh’s waist demonstrates he has mastered his subconscious mind. And the axe is used to sever attachments that no longer serve you. This is an act of making sacrifices and giving up things you do not need, and for that you need discipline.

The mouse on which Ganesh rides represents ego. Because mice live in the dark, they are a symbol of ignorance, which is what we are when we allow the ego to take control. So when Ganesh is seen riding the mouse, it is to show he has control of his ego.

The rope Ganesh holds in his upper left hand is the weapon he uses to place and remove obstacles. He is also often found eating sweets which represent rewards for his intellect. In another myth, Ganesh is said to have written the Vedas by snapping off his tusk – another example of his wisdom and intellect.

So as you can see, Ganesh means just a little bit more than the ‘remover of obstacles.’ He is a symbol of the life cycle that challenge us to expand consciousness.

Master Mind Content is a leading authority in decoding ancient symbolism . Our research unveils the secrets to understanding and taking control of the the subconscious mind, channeling energy to self-heal and effectively using universal laws to fulfil your potential.
« The Symbolic Meaning of the Dancing Shiva
The Symbolic Meaning of Surya »