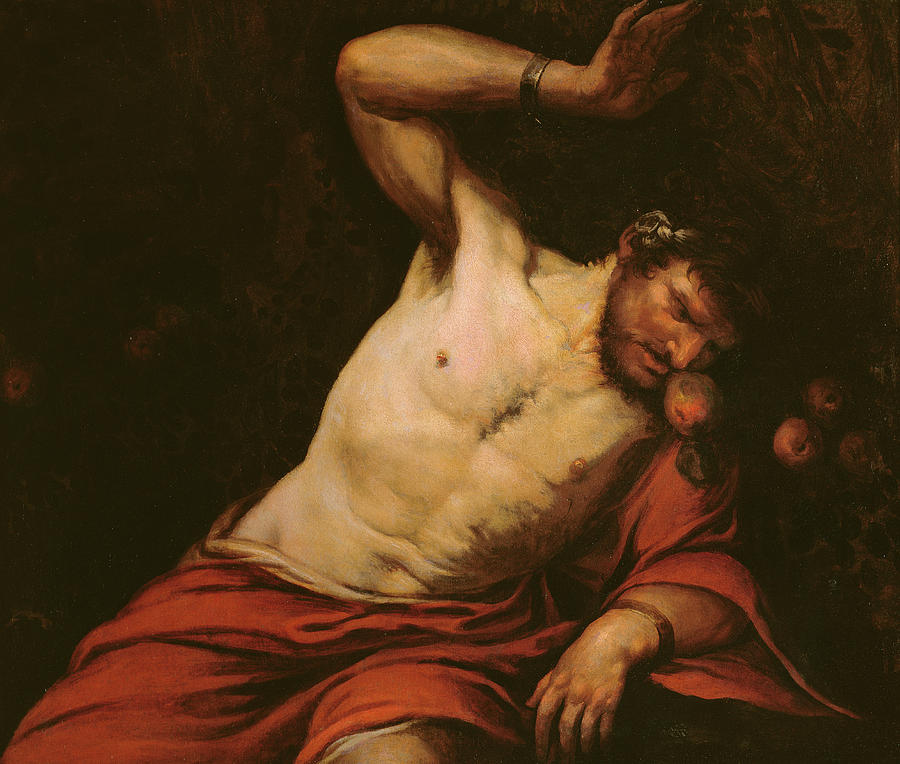 In Greek mythology, Tantalus is the father of Niobe, the queen of Thebes who boasts about her abundance. For the insults, she aims at their mother Leto, Artemis and Apollo slay Niobe’s 14 children.

In this article, I explain the esoteric meaning of the symbolism and the lessons you can learn from the myth of Tantalus.

Tantalus was the son of Zeus and the nymph Plouto, the daughter of Titans. This indicates Tantalus is undeveloped energy that can cause people problems. This is confirmed by Plato in the Cratylus; the etymology of Tantalus is he "who has to bear much" and “wretched" says the ancient philosopher.

The symbolic meaning of Tantalus is described quite explicitly in Greek mythology. After being invited to dine with the gods in Olympus, Tantalus disrespected Zeus by stealing ambrosia and nectar - the food of the gods.

Tantalus’ motive for stealing the food was to reveal divine secrets to the people. Food is knowledge and knowledge is power.

To impress the gods, Tantalus sacrificed his son, Pelops, cooked him and served him to the Olympians at the banquet. His actions disgusted the Olympians and they refused to touch the offering. Zeus ordered Clotho (the spinner of fate), to restore the boy back to life.

As a punishment for his misdemeanours, Tantalus was sent to Tartarus and made to stand in a pool of water beneath a tree with low hanging fruit. But each time he reached for the fruit, the wind blew the branch from out of his reach. When he bent to take a drink, the water receded.

The Esoteric Meaning of Tantalus in Greek Myth

Subsequently, Tantalus is where we get the English word, tantalise, which alludes to a desire or temptation that does not deliver satisfaction.

The esoteric meaning of Tantalus in myth explains that people that seek pleasure from the outer world will never be satisfied with their lot. When you look for happiness in the outer world, you program your ego to need material attachments to satisfy your emotional wellbeing.

People that cannot find solace with themselves - happiness from within - also seek to satisfy their emotional wellbeing from other people. This will often involve boasting about your material wealth and achievements to earn respect and attention from others - as Niobe does.

These attributes are associated with “grandiose narcissists” - people that have an over-inflated view of themselves and think they are superior to others.

Narcissists are focused on getting attention and admiration from others. They only care about themselves and have a tendency to give in to one’s own needs and disregard the needs and feelings of others (Lobbestael, et al., 2014).

Narcissistic tendencies are the result of a lack of self-love and self-respect. When these attributes are lacking, you do not nurture self-esteem or self-worth. As a result, you look for pleasure and satisfaction from the external world.

Master Mind Content offers an essential self-development program. Whether you want to overcome addiction, lose weight, cure anxiety, or transform your life in whatever ways you can imagine, our personalised self-help programs show you how to expand conscious awareness and improve your quality of life.

Master Mind Content is a leading authority in decoding ancient symbolism . Our research unveils the secrets to understanding and taking control of the the subconscious mind, channeling energy to self-heal and effectively using universal laws to fulfil your potential.
« Artemis and Apollo Slay The Children Of Niobe

Artemis and Apollo Slay The Children Of Niobe Read More
Apollo in Greek Mythology Read More
The Symbolic Meaning of Demeter in Greek Mythology Read More
1 2 3 … 9 Next »
Copyright © 2022 Master Mind Content. All Rights Reserved.
Search Our Site
We use cookies on our website to give you the most relevant experience by remembering your preferences and repeat visits. By clicking “Accept”, you consent to the use of ALL the cookies.
.
COOKIE SETTINGSACCEPT
Manage consent