The enigma of the number twenty-three has captured the imaginations of the public for decades. The mysterious number features repeatedly throughout history, is associated with the dates of births and deaths of significant figures, and has been the inspiration for artists of all disciplines. 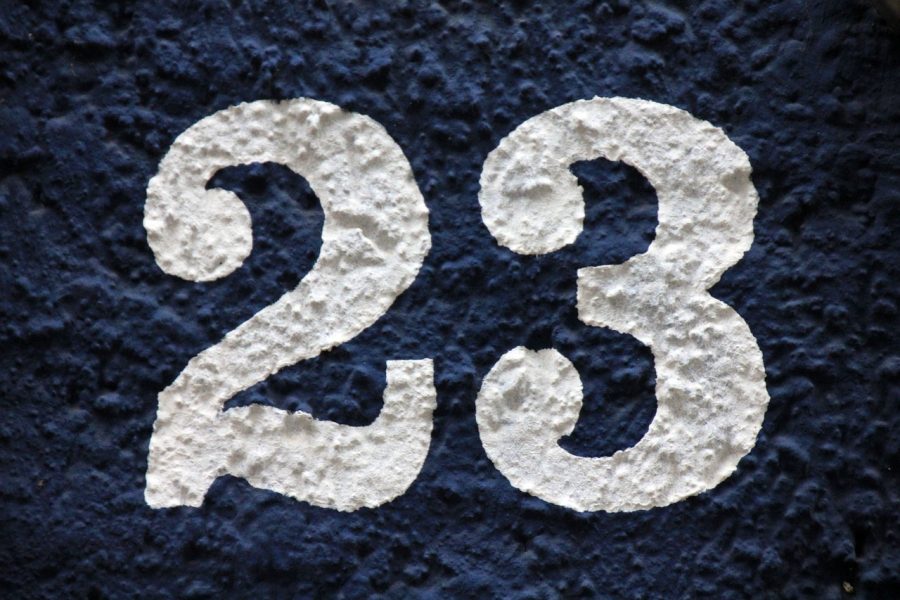 Creative artists such as William S. Burroughs have been inspired by the meaning of the number and seem to be well aware of its enigma. Star Wars director, George Lucas, has used the 23 on more than one occasion in his films, and the German movie ’23 Nicht Ist So Wie Es Scheint’ is dedicated to the obsession of the number and is based on a real-life story.

And these are a mere smattering of examples. You can find more here.

The number twenty-three is typically associated with luck, both good and bad. It is also said that when you see 23’s persistently in your life, you need to have the ability to adapt to change – because something is about to happen that has an overriding impact on your life.

The 23 therefore is a profound number with deep meaning, one that has been submerged in the West by Holy Scriptures and confused thanks to the switch in important dates following the inception of the Julian calendar which moved the pagan new year at the end of April to the beginning of January (more on that later).

In Revelations of The New Testament, there are 22 sections, but mysteriously, the last section only has 21 lines. Some scholars believe this cut-off implies a progression which would mean the last section has been removed from the modern version of the Bible.

But the mystery goes deeper than an academic assumption. Cabalists believe the 23rd letter from the Hebrew Alphabet is also missing, and this the Torah only features 22 letters rather than 23. Are Cabalists clutching at straws? Maybe, but the Latin alphabet that shares the same roots as the Hebrew alphabet does feature 23 letters.

So are the spiritual leaders of Judeo-Christianity hiding a mysterious secret behind the number twenty-three, and if so what is it?

In ancient alchemical symbolism, the 23 is related to transformation. Aleister Crowley defines the number as “parting, removal, separation, joy, a thread, and life.”

The 23rd path of the Qabbalistic Tree of Life is the Hanged Man indicating the number is associated with death and rebirth – for something new to manifest in your life, old ways or beliefs have to die.

Is 23 connected to the death and rebirth of the sun?

The reason for this comes back to the solar cults of centuries past. During the winter solstice when the sun reaches its most southerly point during its descent, the ancients used to say the sun had died. At this point, the sun is directly above the Tropic of Capricorn at a declination of 23.5 degrees.

The summer solstice typically occurs on the 21st, 22nd, or 23rd December, although the date is rare. According to timeanddate.com the last solstice on the 23rd December was 1903 – which in gematria is 13, another number associated with good and bad luck.

When the sun begins to make its ascent again, the ancients said the sun was reborn. So the sun dies for three days and is resurrected. Where have you heard that story before? The story of the resurrection of Christ is told around the Spring equinox, the season when fruit and flowers “spring” to life.

According to Norse legend, spring is also the time when the supreme deity Odin sacrificed himself by hanging from the World Tree, Yggdrasil in order to obtain the wisdom of the nine worlds and understand the magic of the Runes, the ancient Germanic alphabet which was influenced by the Latin alphabet although contained 24 letters, not 23.

Furthermore, on the rare occasions the sun is at its lowest point from the 23rd December, it rises again on the 25th December, the birth of Christ, “the son of God”, or as we should say, the Sun. This is where we get Christmas and Easter from in modern times, holidays introduced in association with the Catholic Church when the Julian calendar was in use.

When you repeatedly see the number twenty-three, therefore, it is a signal that you are passing through or should be passing through a phase in which something new will come into your life, and it will be a major change, good or bad luck.

The Karmic nature assigned to the 23 reflects your performance in life’s lessons. If you are successful you can expect good things to manifest, but if you fail, something bad will happen to teach you the lesson the hard way.