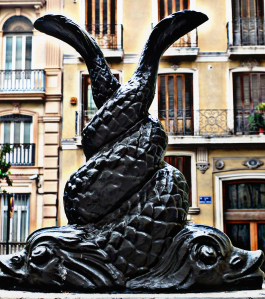 Drinking Fountains in Valencia: The Symbolic Meaning of Fish and Snakes

Everywhere you look, in every town city and village, you will find evidence of esoteric symbolism. Understanding its meaning gives you a powerful tool with which you can carve out a better quality of life. In this article, I give you an example using the symbolic meaning of fish and snakes on the drinking fountains of Valencia.

Valencia on the east coast of Spain is an attractive and inspiring tourist destination. With a laid back atmosphere, clement year-round weather and awe-inspiring medieval architecture, it is a pleasure to explore the maze of urban back streets of the historical centre.

Throughout the city, you will find drinking fountains from which you can quench your thirst gratis of the city. The ornate fountains are identified with a delightful sculpture of two intertwining fish, which to the untrained eye look somewhat innocuous.

But look closely and you will notice the adept fish sculptures have a dual design which is extremely rich in alchemical symbolism; the fish and the serpent.

The Symbolic Meaning of Water

Fish are associated with water, thus in symbolic terms also relate to water, one of the four elements which are commonly known to govern emotion and intuition. Because of water’s ability to flow and adapt to its surroundings, it represents your ability to adapt to any given situation in your day to day life.

Water is also associated with creation. All life is said to come from water and therefore has a connection with fertility and birth. It, therefore, has a prime symbolic meaning of creation which we can see throughout the symbolism on the drinking fountains in Valencia.

However, the deeper meaning of water, or more accurately, a body of water such as a lake or sea, is the unconscious. Just as all life comes from water, all human experience is born from consciousness.

We also find symbolic similarities between the sea, the Moon and the Mother Goddess, all of which are linked with the feminine aspect; rebirth and the mysterious, unknown aspects of the subconscious.

The familiar sea god Poseidon of Greek legends (Neptune in Roman myth) is connected with the subconscious and the gravitational pull of the moon, of course, affects the tides of the ocean.

The murky depths of the ocean which are yet to be explored and understood is equal to the infinite wisdom of our emotions and subconscious mind which mysteriously mingle in ways we often struggle to understand.

But what we can get to grips with is how to use water symbolism to help us create what we want in life and adapt to all and any circumstances we find ourselves in.

The Symbolic Meaning of Fish

Unsurprisingly the symbolic meaning of fish is an extension of their relationship to water. If water is the unconscious mind, then fish are the contents that spring forward from the unconscious - what Carl Jung calls archetypes.

In Hindu mythology, and later in Greco-Roman myth, the fish is associated with transformation and creation.

We also find the power of the female deity reflected by fish thus it has a strong connection with fertility. And fish never appear alone, but as a pair, often with interlocking tails.

Let’s take Greek mythology. When the demon Typhon attacks Mount Olympus, Aphrodite and her son Eros transform into fish and make their escape. They interlock their tails so as not to lose one another.

Aphrodite is the personification of emotion and her son, Eros is the god of love. By taking the form of fish, they resemble the strongest of generative powers. The same expression is found in the Vesica Pisces, the fish symbol of Jesus, which is formed by overlapping two circles.

In Pythagorean mystery schools, the Vesica Pisces also represents the male and female aspects of our personality and the interlocking of the physical world with the spiritual world (conscious mind and subconscious mind).

Do you see how all this is tying together?

The twin fish of the Vesica Pisces, as we find in the constellation of Pisces, signifies the structure of intuition and emotional thoughts which shift from the spiritual realms to manifest on the physical plane. Thus we see the deeper symbolic meaning of fish are also thoughts that arise from the Collective Unconscious or Akashic Records.

The Esoteric Meaning of Intertwining Serpents

The serpent has many meanings in esoteric symbolism, but in the water fountains of Valencia, two intertwined snakes are indicative of the kundalini energy which promotes wisdom and health. It is the Ida and Pingala energies that travel up the Sushumna along the spine.

Kundalini energy is the creative life force which when awakened can wash away unwanted impurities from the body. Once risen to the third eye and crown chakras, it will dispel misunderstandings and eliminate false beliefs.

The roots of Kundalini comes from the Sanskrit word to mean coiled serpent. Once the energy is awakened through yoga and/or meditation, it transmits the spiritual power which leads to higher conscious awareness.

In eastern philosophy, kundalini energy is said to pass through three primary channels, Ida, Pingala and Sushumna which start at the base of the spine and end in the brain.

The energy passes through the seven chakras which once activated leads to balance and harmony. The more often you come to moments of self-realisation the stronger the kundalini becomes.

As you expand this conscious state, your perception of reality alters. The veil of delusion begins to lift and you start to see more truth in situations. Positive emotions also come naturally and you experience more love and compassion. You do not feel fear.

We find this same serpent symbolism in the staff of the Greek God Hermes (Mercury in Roman myth). There are two myths that involve Hermes and snakes. In one the young God sees two serpents fighting. To stop the fight, he placed a staff in between the reptiles and they both climbed around the pole.

In the other myth, Hermes is presented the caduceus by the God Apollo who represents light. Hermes is the God of wisdom. The caduceus, therefore, represents Kundalini energy that brings light and wisdom.

Asclepius, Greek God of HealingToday the caduceus is used as the symbol for medical associations and pharmacies, thus again we see the serpents being linked with health and wellbeing. It is said the two snakes represent the two halves of the nervous system; motor and sensory, sympathetic and parasympathetic.

In its entirety then, the water fountains of Valencia teach us to control our emotions and bring our body into balance in order to transmute energy and have good mental and physical health.

You should also drink plenty of water.

Do you want to know how ancient symbolism can help you?

Master Mind Content is a leading authority in decoding ancient symbolism . Our research unveils the secrets to understanding and taking control of the the subconscious mind, channeling energy to self-heal and effectively using universal laws to fulfil your potential.
« The Symbolic Meaning of the Crossed Swords
What Is The Symbolic Meaning Of A Square? »