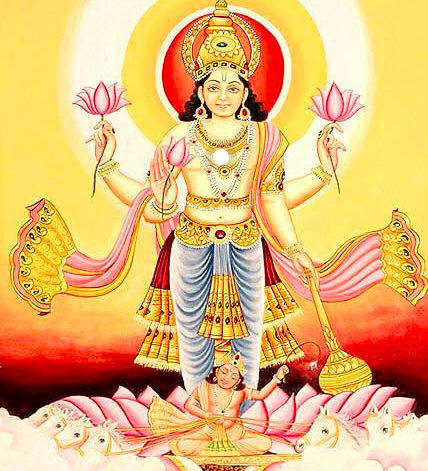 Aryaman: The Symbolic Meaning of the Adityas God

The Rig Veda names Aryaman as one of the 33 most important gods of the Hindu pantheon. On that basis alone, it is worth looking into the esoteric symbolism surrounding the ancient deity to determine what lessons modern man can learn from ancient civilisations.

Aryaman, or Aryama, is said the be your best friend and is invoked with Mitra and Varuna, which I established in a previous article represent the conscious aspect of the ego and shadow self. In accordance with Sigmund Freud’s model of personality, Aryaman is the voice of reason – although sometimes he doesn’t say much. He is very much a live-and-let-live type of guy.

However, he is Truth – the voice of expressive knowledge that will deliver joy and power when merited. The Vedas refer to him as a “guard of the Sacred Laws”. The cosmic laws of consciousness.

In true alchemical fashion, Aryaman is associated with chivalry, honour and nobility that govern the rules of society. He is the disciplinarian that orders us to do the right thing – to carry out your dharma in the way your consciousness is ordained.

The Hindu god could be said to be the power and determination that enables us to transcend above the whims of the ego, the immatured mind that is all about wanting and desire. And he is. But Aryman also sits on the fence and allows us to make the same mistakes then sits back to watch the Aswins karma twins kick your ass.

There is an ancient shamanic expression about two wolves that reside within us. One of the wolves is a mellow, friendly wolf, and the other is an angry, pedantic wolf. The wolves fight a lot. The wolf that wins is the one you feed the most. And that is the wolf that is reflected in your nature.

Mitra and Varuna are like the two hungry wolves. Aryaman is the dharma that feeds them, the part of the ego that makes conscious decisions. Psychologically he shares attributes of Freud's Super-ego. This is the aspect of consciousness – and things that you know yourself deep within – that tells us to do the right thing.

However, the Super-ego resides in the personal unconscious which is often programmed with limiting beliefs and false Truths you have been told by parents, teachers, the media, and religious and political leaders. There are times when you have to feed the shadow self. As the psychoanalyst, Carl Jung pointed out, if you are not aware of the dark side of your nature, it can be dangerous for the psyche.

In The Republic, Plato used the allegory of the shadow on the cave wall to reflect his knowledge of the unseen darkness that lies within us. After a lengthy dialogue, Socrates concludes:

“The process, I said, is not the turning over of an oyster-shell, but the turning round of a soul passing from a day which is little better than night to the true day of being, that is, the ascent from below, which we affirm to be true philosophy?”

In Hindu mythology, Aryaman is represented as a dutiful god that controls time and judges the whims of Mitra (the dawning of self-knowledge) and Varuna (the egoic mind) impartially. The gods are the opposing wolves of the personal unconscious that “ascend from below.”

Aryaman will not tell you what to do, but will put a lead on the wolf you feed and guide it along the path of the karmic journey.

The ancients were verily aware of our dual personalities and understood the need for frivolity as well as the need to restrain ourselves and take everything in moderation to keep our soul in sync with our life’s purpose. Like everything in nature, we need balance to thrive. Aryaman is that balance so when he does speak, listen to him.

Master Mind Content is a leading authority in decoding ancient symbolism . Our research unveils the secrets to understanding and taking control of the the subconscious mind, channeling energy to self-heal and effectively using universal laws to fulfil your potential.
« The Three Gunas in Hinduism
Who Are The 12 Adityas in Hindu Mythology? »

The Symbolic Meaning of Cows in Ancient Mythology  Read More
Who Are The 12 Adityas in Hindu Mythology? Read More
The Three Gunas in Hinduism Read More
1 2 3 … 9 Next »
Copyright © 2022 Master Mind Content. All Rights Reserved.
Search Our Site
We use cookies on our website to give you the most relevant experience by remembering your preferences and repeat visits. By clicking “Accept”, you consent to the use of ALL the cookies.
.
COOKIE SETTINGSACCEPT
Manage consent